This week I turned 34 and a half. I’m now just 6 months away from turning 35, which will officially toss me out of that targeted demographic which has traditionally been the coveted marketing demographic: age 18-34.

I’m also only 6 months away from the birth of my 2nd child; who I think is a girl.

Turning a year older is not something I fear or hide. I celebrate getting older. That’s mainly because I’m so grateful for the amount of maturity, emotional intelligence, and life experience I gain each year I’m alive.

And research shows the same thing; that the age people report being the happiest is 34.

Additionally, I have (hopefully) already made my dumbest mistakes and learned my hardest lessons in life.

If I simply apply what I’ve already learned from life so far, I should be alright. In theory, I should be on auto-pilot, from here on out, to some degree.

I feel that while I’ll constantly be learning something new every day, my “life’s biggest learning curve” is complete. In other words, now I know what to do, it’s just a matter of testing that knowledge and experience for the rest of my life to see what else I can make of it.

When I turned 30, I knew I was hitting a major milestone. But in hindsight, I now realize that the reason it was a major milestone for me is because I have learned some of life’s biggest and most crucial lessons since then, during these past 4 and a half years.

My son was born just a few months before I turned 30. Obviously, raising him has taught me a whole lot about life.

Plus, I made some wrong financial and career decisions around that time as well; which ultimately led my wife and I to become the strict Dave Ramsey followers we now are.

Not to mention, I was hired as Parents.com’s official daddy blogger right after I turned 30, which ultimately meant for 3 years, I had to do a blog post daily; being encouraged to be controversial by my editors.

Therefore, I can see in retrospect that I sporadically said plenty of immature and/or now embarrassing things in my blog posts during that time in attempts to “better engage my audience.” I learned a lot from that experience and I’m completely grateful for those 3 years.

On top of all that, I’ve learned the hard way what not to post on Facebook, since turning 30.

But now, I’ve lived through all that.

And I’ve been married for over 7 years now. It would be an understatement to say that marriage, in addition to raising a child, has made me a more mature, less selfish, better balanced human being.

The first day of the rest of my life began the day I turned 30. I can only imagine how much more enlightened I will feel and be by the time I turn 40.

We have preparing you for this all year. Every time we would ask you if you wanted a brother or sister, you always replied, “No! I just want my stuffed animals!”

But as of this summer, that question ceased to simply be a hypothetical question.

A few weeks ago, we made it clear: “Jack, there is a little baby inside of Mommy’s tummy.”

Since then, you have been very excited and curious about this. You no longer see having a baby brother or sister as a bad thing.

I love the fact that you’ll be 5 and a half years-old when your baby brother or sister arrives.

You’re already such an independent boy. It’s going to be so rewarding seeing you help take care of your sibling. You’re going to be great at it.

This is going to be so exciting for our family! 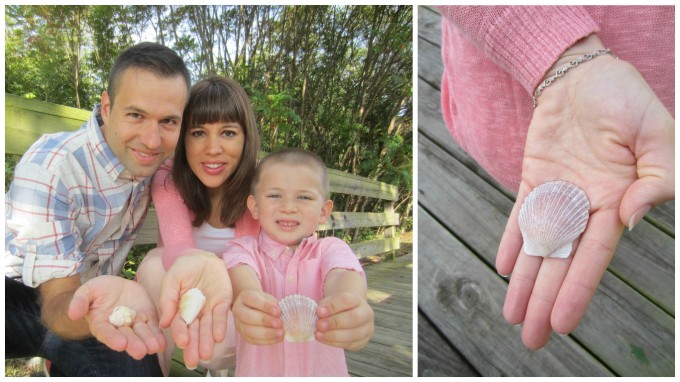 Two days ago I posted a sneaky picture of our family on Facebook. I had been crafting this idea for weeks now. I wanted to release a subtle hint that to the general public that our family is expanding.

To play on our last name, I had each of us hold a seashell towards the camera; then I took a picture of Mommy’s other hand, secretly holding a 4th seashell behind her back. Then I left a simple caption:

But I don’t think anyone really figured it out.

Plus, a couple of weeks ago I wrote a letter to you called The Dresser for Our Guest Room. It was really a post about your baby brother or sister’s room instead; they are the “guest.”

Not to mention, earlier this week I published People Finally Stopped Asking If We’re Going to Have Another Kid, which gave birth to much speculation.

You and I also made a “very special episode” of Jack-Man, in which it is revealed Jack-Man is going to be a big brother; as if that wasn’t an obvious giveaway to the general public. Even after releasing that video, the news still didn’t spread.

This letter itself is a throwback to This is Not a Facebook Pregnancy Announcement from July, in which I proclaimed in big bold letters, “There is not a baby on the way. I promise.”

Yesterday I posted this secretive picture of our family, as well.

I admit, I’ve had a lot of fun going public with our family expanding.

This is going to be so good. Just about 6 months away…

For example, when we first moved into our new house nearly 6 months ago, I made sure we set aside our downstairs living room as a sanctuary free from a TV set; that we established our main common room void of that infamous conversation killer. We have to deliberately go upstairs if we want to watch something.

This week I came across this new infographic on Happify, a website and app which is dedicated to building happiness skills through scientifically designed activities and games.

The infographic is called “What You Watch This Summer Can Make You Happier.” I love the way it scientically explains what actually makes us happy.

In addition to making you feel special by taking you to go get tater tots at Burger Republic back in September for the “The Great Food Truck Festival”, you also had a lot of fun that same weekend by helping Mommy and me make some of the party favors for your upcoming birthday party in just two weeks.

For your appropriately themed Lego party at Bricks 4 Kids (A Lego-themed party place), we are giving out homemade Lego Man crayons as part of your party favor bags.

Mommy found the Lego Man mold on Amazon. From there, we found a few boxes of old crayons; some of them having been baking in our cars for the past couple of years!

My main job was to take the knife and cut off the paper wrappers. Your job was to organize the crayons by color (which you did with great pride) and throw away the wrappers for me after I cut them off the crayons, which was actually very helpful for me.

From there, Mommy crushed them and fit them into the molds, baking them for a little while. After that they went into the freezer to cool off.

Too bad we only had one mold tray, which yields 8 Lego Man crayons at a time. Mommy was basically baking batches for about 6 hours straight in order to produce a total of about 64.

So as you can see, as long as you use as least 2 different colors of crayons, each Lego Man crayon is guaranteed to look unique, like a snowflake or a fingerprint.

My favorite one looked like the Earth. I named him Captain Planet.

Without surprise, you immediately chose your favorites to put in your own goody bag.

Making those Lego Man crayons was definitely a fun family activity for us. Granted, Mommy’s role was the most tedious.

But we all a great time. It was such a unique and “Pinteresty” thing for us to do.

I guess we get cool points now or something…

I know nothing about how to take care of a baby, yet.  But what I do know, and what I have always known when it comes to babies is how to make them laugh and play with them.  In the way that women instinctively speak in a high, falsetto voice to babies (I’ve read that that’s the frequency babies hear when they’re that young, as opposed to a normal speaking voice), I automatically become any given idiot monster when I find myself in a situation where a baby is looking at me, waiting for some kind of confirmation.

The default character I play while entertaining babies could best be described as Popeye mixed with Grimace mixed with Beaker: A smiling, squinty-eyed, beeping mutant.  But what can I say?  Babies like me when I am this fictional goofball.

And really, that’s what happens to any adult when a baby is set in front of them.  Adults become ridiculous.  That’s one of the many reasons people like babies.  Because adults get a free pass to act stupid.  All in the name of making a baby happy.

Needless to say, I am so looking forward to my free pass. 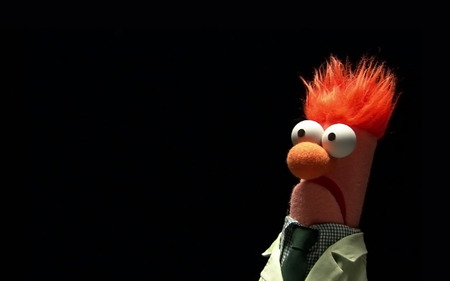