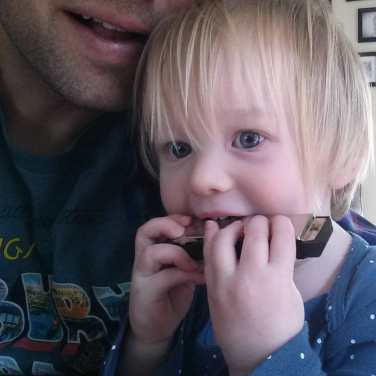 Now that I am basically building my own side business by writing articles with accompanying videos for companies to promote them in social media, you have seen me pull out my guitar a little bit more, as I craft and create unique music each for the videos.

As you were sitting at my feet while I played guitar a few days ago, you wandered over to my guitar case and found my harmonica. I actually had forgotten I left it there. So you did me a favor when you found it.

I immediately thanked you, “Oh Holly, good job! Now I can play my harmonica again!”

It had been several months since you saw me play it, but the moment I put the harmonica to my lips, your eyes lit up, knowing what you were about to hear.

Once you heard the first note, you were already reaching for the harmonica. I was caught off guard by eagerness to play the instrument.

So I let you have it.

This resulted in you basically biting the harmonica, but I can tell you were attempting to actually blow air into it, or breathe in; either of which would have resulted in musical sound.

Your first harmonica lesson was mainly just about you becoming familiar with holding the instrument and attempting to make any sound at all. I figure that’s typical for the first music lesson for most musical instruments.

We’ll see where this thing goes.

In my mind, it’s a given that I’ll be teaching your brother to play guitar.

But I admit, I would be equally honored to teach you the guitar as well. I can already imagine you as a teenager girl wearing a dress with cowboy boots, playing the guitar and singing; thanks to Daddy’s lessons.

P.S. To see me playing harmonica, check out this video I made before you were born…

I will be emailing the following letter to the same casting agency that reached out to me a few months ago to interview and potentially invite my family to participate in the upcoming reality TV show, The Family Project on NBC.

After that, this letter will then be going out to the all the casting agencies and directors for all the major children’s (and family) television networks; including PBS, Nickelodeon, Disney, TLC, Animal Planet, and The Discovery Channel.

I believe you may be interested in meeting me. I think I can solve your problem in that I am who you are looking for if you are currently in need of a children’s television host.

However, please do not take my word for it…

Instead, simply watch me at work. My passion is creating original content to entertain children; as I have a 5 year-old son, as well as a daughter due to be born in April.

Just watch this quick webisode of my newest web series, Uncle Nick’s Enchanted Forest. Everything you see here is original content. I write, produce, and direct my shows; as well as serve as the protagonist and voices to the animal characters:

I write and perform my own songs, just like the beloved Mr. Fred Rogers did. I play both guitar and harmonica; and obviously sing.

You will see how I simply engage children in nostalgic ways, similar to that beloved uncle everyone has.

To further showcase my acting and production skills, as well as my musical talent and over all creativity, I also ask you to watch a short webisode of my other original web series, Jack-Man; which is a sci-fi super hero show starring my son and me.

In this series, you will see my acting skills as a villain; not just simply the kind and warm “Uncle Nick” character I play on my other series. Again, I created all of this content from scratch, including the lyrics, music, and performance of the songs.

Also, I already have a following on my website, Family Friendly Daddy Blog; where I maintain a minimum of 15,000 views per month. (For 3 years, I had previously served as the official daddy blogger for Parents.com; the website for the legendary Parents magazine.)

Thank you so much for your time and consideration today. Even if I never hear back from you, please know I will continue creating original content to entertain and engage children in the YouTube world; knowing that one day I will get my big break.

Granted, I hope that “big break” comes from you.

After filming 22 webisodes of Jack-Man from May through October this year, I decided to take a break from that and create a new web series; one that is specifically designed as a kids’ show, as opposed to the sci-fi super hero sitcom format of Jack-Man.

My idea was to create a show in which my niece could watch and be entertained by on YouTube. So I began combining elements of entertainment I thought would be appreciated by a 4 year-old.

Think of my new show, Uncle Nick’s Enchanted Forest, sort of as an updated version of Mr. Rogers’ Neighborhood, but that is more outdoors based.

The show always begins with me introducing the audience to an old trinket that I just found. In the first webisode, it’s a harmonica.

I taught myself a few riffs the day before I filmed, and decided to record the theme song based off of my experimentation.

Another ritual is that I remind the viewers how to do my “enchanted animal call” before I put on my puffy vest.

These first couple of webisodes feature the theme of bullying.

My plan for now is to continue featuring my son’s stuffed animal collection as the characters in the forest.

I intend to film at least 3 more webisodes during Christmas weekend; with the goal of ultimately reaching 22 like I did with Jack-Man.

By the time I reach the 22nd webisode, the series will naturally evolve to where it needs to be. As I learned from making Jack-Man, making the first dozen webisodes teaches me how to actually direct and produce the show. That way, by the 2nd dozen or so webisodes, the show is more crafted.

In the words, the quality will increase as the show progresses.

As for now, these are the first 3 original webisodes of Uncle Nick’s Enchanted Playground. My dream is to one day host my own kids’ show on a television network.

This is me building my dream.