Sometimes I feel like Dear Abby, except that the questions and comments people type into search engines to get to Scenic Route Snapshots are a bit on the incoherent side.  Here’s the newest batch: 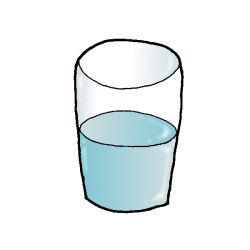 “biological chicken”- We live in a time where most chickens are no longer biological.  Ever since the Droid Empire took over our planet, most of our food is simply projected figments of our imagination, linked in to the Droid scanners.  Even still, tastes like chicken.

“They’re always sweaty in Dexter”- That’s because the show takes place in Miami.  Similarly, they’re also always sweaty in most reality dating shows on VH1, but that’s for a different reason.

“bacon egg sandwich, grapes, chocolate”- What are you, a ten year-old boy?  Does your mommy know you’re playing on the Internet?  Admittedly, I could see how that could make for mouth-watering breakfast on the right kind of morning.

“beer scripture fellowship”- Jesus and His disciples drank wine.  But that was so like 2,000 years ago.  It’s time for Christian men in Bible studies to switch to beer.  Nothing like reading through Habakkuk with a Heineken in hand, I always say.  Fat Tire and Phillipians, anyone?

“what to do to bad people”- Sarcastic remarks and physical injury only fuel the fire, so I’ve learned from the past.  My new thing is to sincerely pray that they enter into an authentic relationship with Jesus as their Savior.  Then they may end up on my side and fight Satan with their negative vibes.  It’s a win-win.

“how to compliment a classic song”- Man, that’s a tough one.  Just a shot in the dark, but you could try this: “Hey it’s ‘More Than a Feeling’ by Boston…  I love this song!  This song rocks!”  Change the title of the song and the name of the band as needed. 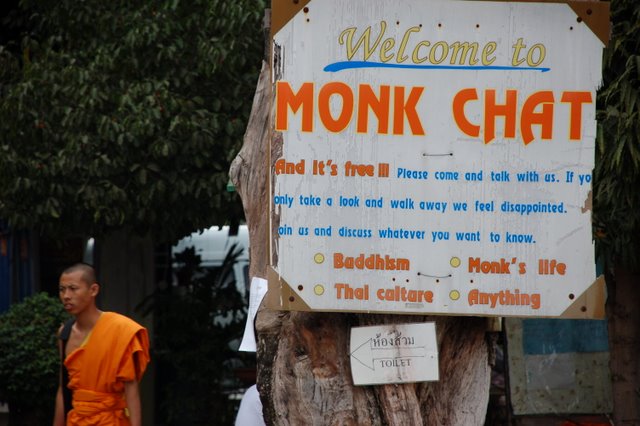 After recently revisiting some memories from the summer of 2004 in Thailand, I must have tapped in to some sort of parallel between my life now and my life at age 24, because there is some therapeutic and natural about replaying those stories out loud (or by typing them out and reading them).

It all started a few days ago when my friend and former  college roommate Josh Taylor sent me a text message asking what the best phone number to reach me was.  A few texts later, I was jogging his memory (and mine) with a reference to “monk footprints”…

During our week long vacation from teaching at Bangkok’s Global English School (all schools had a mandatory closing for a week due to the International AIDS Conference being held in Bangkok that year), Josh and I decided to take an excursion to Chiang Mai and Koh Samui by overnight train, motorcycle, and plain.

In our overnight train ride to Chiang Mai (Thailand’s 2nd largest city) up in the North, our seats converted into beds for the night.  Right across isle from us on the train was a middle-aged Buddhist monk, dressed in his drab orange robe, marked with animal tattoos all over his head (to fend off evil spirits).   Despite the loud bangs and rumbles off the tracks throughout the 12 hour ride, the monk’s constant religious chants were a bit distracting (and kinda creepy).

But when in Thailand, you learn just to go with it.

As nighttime approached, the train attendants came through the isles to transform our seats into beds.  The monk headed to the restroom.  When he returned, he used Josh’s bunk bed (which was on the bottom) as a stepping stone to get up on his top bunk.  He wore no shoes.  His bare feet, which were caked with dirt, left “monk footprints” on Josh’s white bed sheets.  Moist, mud-infused footprints.

Therefore, the phrase “monk footprints” will always be a legendary term between Josh and I.

When we arrived in Chiang Mai early the next morning, we rented “motorcycles” (a loose term in Thailand, as it basically often means a glorified moped) by paying $4 a day and handing over our American driver’s licenses as a security deposit (which does seem a bit risky; turns out, a few weeks later I spent two weeks in South Korea with my sister and my passport was stolen).  After a day of exploring (and getting a little lost) the city, getting curious about what the Chiang Dao Cave was as well as what the “live monkey shows” were all about.

Because the school in Bangkok we were teaching at is a Christian school, we were able to have it arranged that we could sleep in a church in Chiang Mai for free.  Can’t argue with a free shower and bed for a few nights.  Of course, the shower water was ice cold (which isn’t a horrible thing in a country with a climate similar to Miami).  And as for the sleeping arrangements: two plastic sleeping bags on a cold, slick cement floor on the second floor in a building with no air conditioning and a garage door as the main entrance.

The best part though, was the fact it was impossible to stay asleep for more than twenty minutes at a time.  Not because of the heat alone, but because of the tiny little biting ants from whom we evidently were invading their space.

And yet I count all of these as fond memories.  Backpacking through Thailand for me was a rite of passage.  An adventure that will always be part of me.  Maybe one day when I become a rich, successful author with a book on the New York Times Best Seller List, I can manage to find the money and time off to go back.

Until then, Thailand remains a magical, mysterious place that sometimes I think of as a dream world in a parallel universe that only exists in my mind. 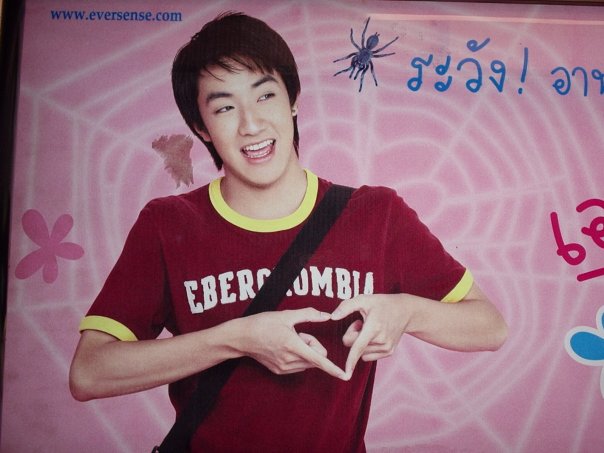 A billboard we saw at a bus stop there- a Thai clothing company switched the "A" and "E" of Abercrombie to make their "own brand" of clothing. 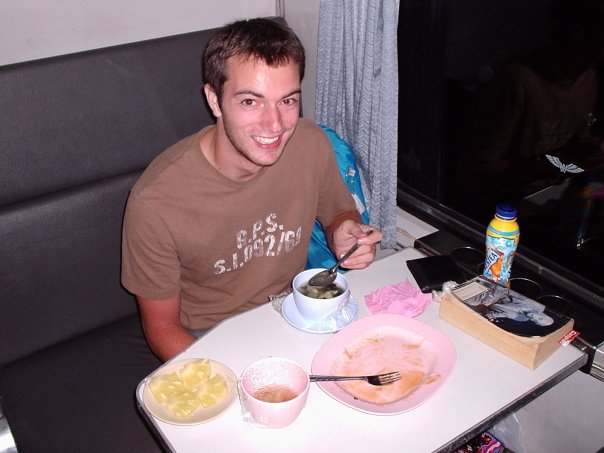 Josh having a random Thai meal on the train before his seat was converted into his bed. 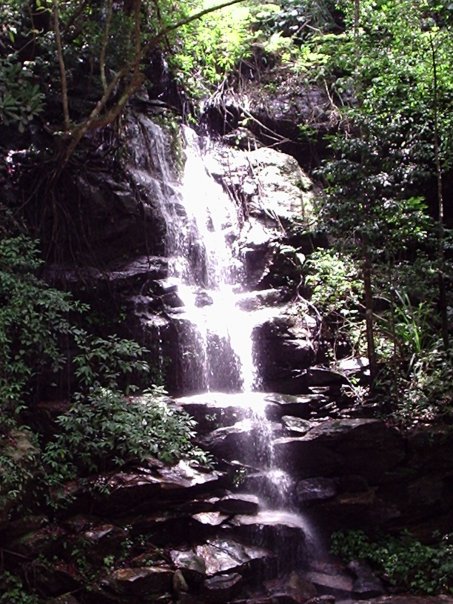 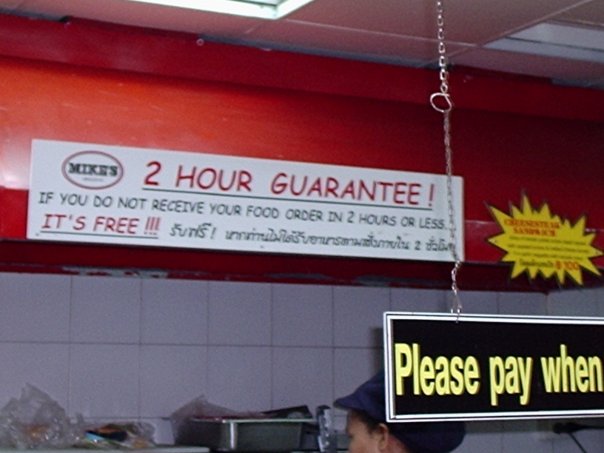 Me playing a song at the Thai church we camped out at. 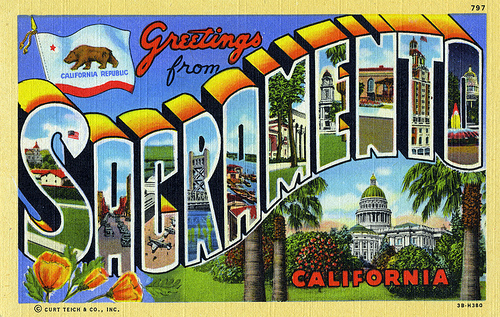 Most Americans don’t know the capitol of Vermont or which states border Colorado, without cheating and looking at a map. Because like taking French or Spanish in high school, if what is learned is not applied on a semi-regular basis, then that knowledge disappears. Especially when it was just rogue memorization for a test we took a long time ago.

Since we don’t really know much about American geography, we use a system that gets us by. It gives the illusion that we are experts, when really we are just BS-ing our way through the conversation. I call it the “Quad Cities Proximity Initiative”. Most states consist of a minimum of four cities that we’ve at least heard of that pretty much cover the 4 corners of the state, even if we’ve never been to that state before; here are a few examples:

Here is an example of how this system works. The other day at work a guy from Indiana was trying to tell me where his hometown is. He said, “It’s about 50 miles south of Indianapolis…” Immediately I started shaking my head with an enthusiastic “oh yeah, yeah” which unabridged, it literally conveyed this message, “I am very familiar with the city you are talking about. I’ve been through there several times. Of course I know that place…” All because I have obviously heard of the state’s capitol, Indianapolis.

There are exceptions to the Quad Cities Proximity Initiative. Texas is huge and has more than 4 familiar cities; it has about 7. And there are those bite-size states like Delaware, where it doesn’t matter what city the person says, because the state only has 3 counties anyway.

When a person names a city I’ve heard of (even if I have no clue where in the state that city is) I give them confidence in me that I am following their lead in the conversation. It’s that simple. No need to stall a conversation because I can’t visualize where the city is. Ultimately, it doesn’t matter. Unless I’m driving there.