Before there were reality shows starring idiots for us to pity/make fun of every week, or a phenomenon called YouTube where any fool can upload their tomfoolery for the entire world to see, there were two decades (the ‘80’s and ‘90’s) where we filmed opportune moments of our own lives and kept them to ourselves to laugh at.  And they became classic VHS gold, forever saved in our memories; ready material for reminiscing with those involved, in an instant’s notice.

The most honored tape of cherished memories still at my parents’ house is labeled “Labor Day ‘90”.  It had just been a few months earlier that my parents finally sacrificed a thousand dollars for the behemoth black-and-white-view-finder-equipped video recorder.  On that lazy afternoon at my Italian grandfather’s house with the whole family there, our lazy vacation day became a personal collection of gems.

So maybe those moments aren’t funny to the rest of the world (not YouTube material), but to our family, the tape is hilarious every time we throw it in the now antique VHS player.  These moments include, but are not limited to the following:

“Can you figure it out?”-Sitting sideways on a plastic ribbon braided lawn chair with my arms behind my back, I faced the camera while my dad hid behind me, putting his arms out as my own.  As my mom asked me basic questions, none of which I seemed to know the answer, my dad used his arms to make motions to indicate it (he used his arms to scratch my head like I was thinking, etc.).

It was pretty obvious he was behind me, not only for the fact that his arms were much bigger and darker than mine, but also because his mullet was showing in the shot.  Finally my mom (as the cameraman) asks the viewers at home, “Can you figure it out?”

“Nick and Dana… back up now!”-  My grandfather lived on five acres which he was very proud of and which was prone to appearances of wildlife.  In the front yard that day, he found a baby bird in nest in a small tree (only about five feet tall).  My mom walked the camera over to the tree, attempting to zoom in on the bird.  In the meantime, my sister and I (respectively ages 6 and 9) ran over to see if we could get a closer look at the bird.

For fear of us scaring the bird away (like a baby bird is going to fly way…), my mom warned us, through clenched teeth (to keeping from scaring the baby bird away) “Nick and Dana… back up now!”  The hilarious part is that the whole time the camera was on the tree, the bird was barely visible up in the top corner of the shot.

“I’m a winner!”- My dad, who a year later won 2nd place in the Northeast Alabama karate sparring tournament, was “play fighting” me.  Doing my best to ward off his slow-motion kicks and punches, he finally got me in a headlock.  He growled to me, “Say ‘I’m a winner’!  Say it!  Say it!”  I struggled to escape as he took me to the ground.  I gave in, with a clever twist.  I declared, “I’m a winner!” in a wimpy, Southern, nine year-old voice that in no way indicated what I was saying was true.

We were the original comedians of comedy in our own worlds.  And even if we never get around to converting those video clips from VHS to digital format and eventually to YouTube, those classic hilarious moments in our minds are still better than any reality TV shows we’ll ever know. 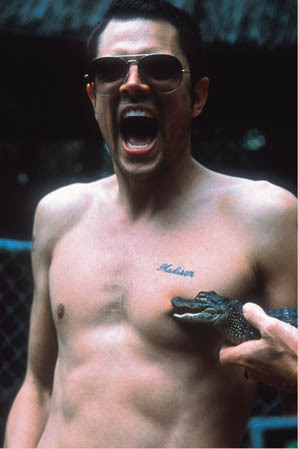