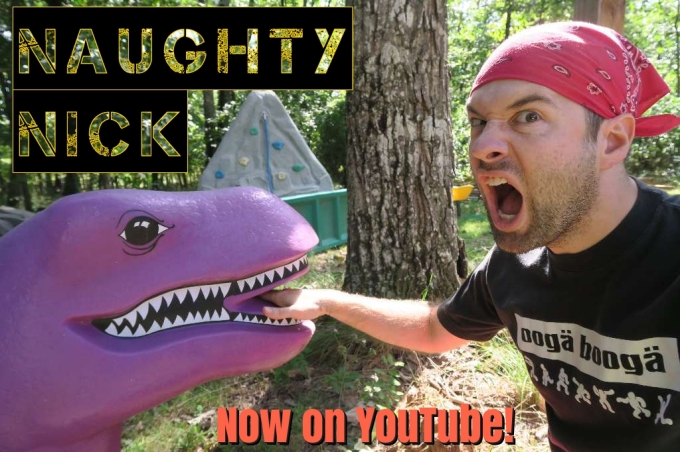 You and I spent hours working together on our Jack-Man superhero video series (23 webisodes) on YouTube.

Additionally, I spent even more time on my children’s program Uncle Nick’s Enchanted Forest (27 webisodes). Those were shows I created that I truly cared about.

But over Labor Day Weekend, I decided, on a whim, to make a fake WWE audition tape… just for fun, while our family was at Nonna and Papa’s house. I therefore invented and became the wrestling character, Naughty Nick.

After I made that first video with my phone on selfie mode, I decided to make 4 more webisodes. Papa helped out with the 4th and 5th, serving as the villain.

I suppose my motivation in making this series is ultimately to add to my Rolodex of sketch series on my YouTube channel. I believe it’s important to showcase my abilities as an actor, director, and writer.

The Naughty Nick series is admittedly a farce of the media’s perception of masculinity, with a throwback to 1980’s professional wrestling.

Naughty Nick presents his own fictional YouTube audience with his fantasy version of reality; though to him it’s actually real. In his world, no one can ever be more masculine or American than he is; nor can anyone ever defeat him. These are things of value in the character’s life.

With nearly 700 videos uploaded on my YouTube Channel and 540 subscribers, I am building The Nick Shell Network. I want serious stuff and I want silly stuff. I want something for everyone.

My hope is that one day, I can catch the right person’s attention with my amateur, yet ideally popular, videos.

Now that you’ve seen the first 5 Naughty Nick videos, you now want to be a part of the series. So I suppose we’ll make that happen in the near future; like maybe this weekend!