Immediately after leaving Walden Farm on Saturday, Mommy wanted to stop by some “cute” antique shops in downtown Nolensville.

I spotted a creek behind the shops, so you and I did the guy thing and opted for the outdoor exploration adventure as opposed to looking at beautiful junk in stores.

Our original agenda was simply to find rocks and sticks to throw into the water.

However, after you realized the creek was swarming with what appeared to be tiny tadpoles, you decided to “catch a tadpole” instead.

First, you called them: “Here, tadpoles! Come to me!”

Then you used a stick as a fishing pole, hoping to catch a few of them. I joined you, of course.

It didn’t take long at all before you thought you caught one, and boy, were you proud! 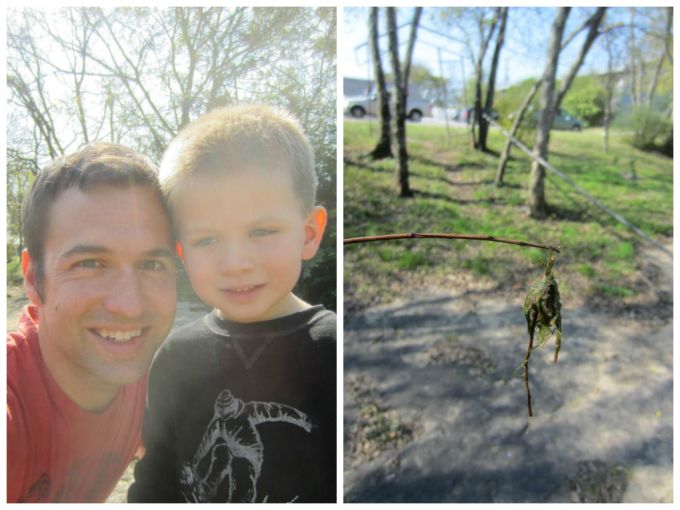 Granted, it was just algae… as it was each time after that.

But in your mind, there was a real possibility of actually being able to catch tadpoles simply by placing a stick down into the water for just a few seconds at a time; with no bait attached.

I love your fascination with fishing. Never mind the irony in the fact our family doesn’t even eat fish or any kind of meat.

Still, it’s as if it’s ingrained in a little boy’s mind to want to go fishing with his Daddy. Likewise, I want to “go fishing” with you.

You and I could have stayed out there at the creek all day, but Mommy eventually came back from looking around at the shops; happy to see us doing “guy things.”

Our recent fishing trip has inspired me to already consider buying us a small 2-man tent to put out on the back patio of our new house once we move in.

We could be camping out by next spring!