After my grandmother’s dream and my wife’s co-worker’s psychic’s prediction of it being a girl, it was pretty obvious to us what the gender of our baby would be.  I drove down to the appointment yesterday full of excitement, knowing that I could finally tell everyone that our intuition was correct once I would get the official confirmation.

Several anxious moments passed as the nurse showed us pictures our  our baby, then finally she asked us, “Do you want to know what it is?”

Laughing, full of confidence, we told her that we were quite sure already, but yes, tell us for sure.

I wish I had a YouTube clip of our reaction.  “WHAT?!  NO WAY!  ARE YOU SERIOUS?!”  Etc., etc.  All exclaimed while hysterically laughing.

Not that it mattered either way to us.  I just don’t think I’ve ever been more surprised in my life.  I wish there was a way to type in a “laughing font” to better show my tone here.  I’m so happy!  We’re having a boy! 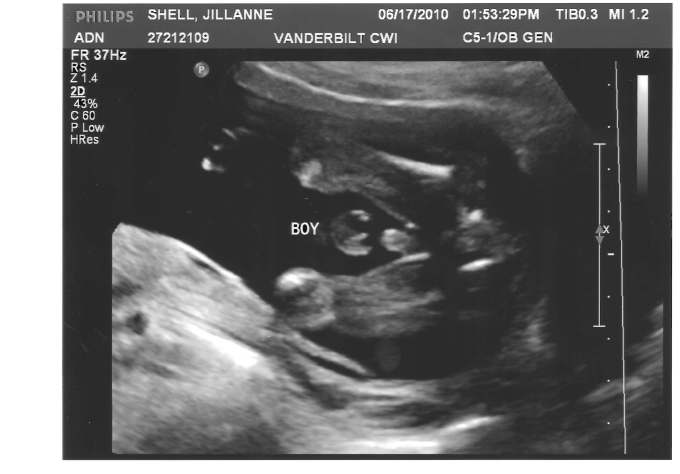 This is an "under the scrotum" shot.

Of course now it’s time to answer the other question: What are you naming him?

Here’s how we came up with the name:

Which is an alternate version of John, which is Hebrew (Jewish) for “God’s grace”.  Which just sounds like a cool name.  It’s simple, not too popular, and easy to spell and say.  And Jack also happens to be the name of the lead character of the best show ever made, LOST (played by Matthew Fox, who is also part Italian.)

Jack is the size of a mango.

His middle name, William, (my wife’s dad’s name) is German and loosely translates as “protector”.

His last name, Shell, (originally spelled “Schel” at some point in American history) is German and loosely translates to “loud and noisy”.

That being said, Jack William Shell is a Jewish-German-German name which fully translates as “God’s gracious gift of loud and noisy protection.”  I’m already picturing a little boy wearing a pot on top of his head, running around the house, banging a pan with a wooden spoon, being “loud and noisy”.

10 thoughts on “dad from day one: The Gender of the Baby”