Last Wednesday, as I was driving Mommy’s car back from a work trip in Kentucky, Mommy called me to explain that while she was driving you home from pre-K in my 2004 Honda Element, the passenger side window just rolled down by itself. 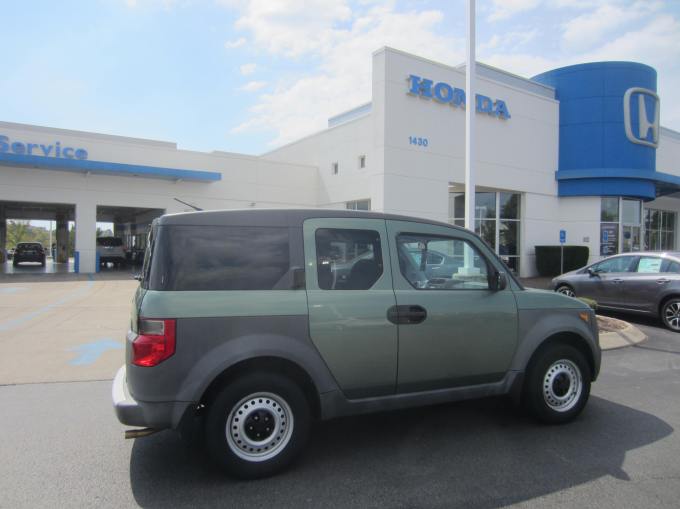 And it wouldn’t roll back up.

Knowing that this upcoming January makes 10 years I’ve owned this car, Mommy and I decided we should heavily consider trading in my car for a “new” used car.

So she starting emailing dealerships. Meanwhile, I went to one dealership in person last Thursday on my lunch break.

Because we are Dave Ramsey followers, we are refusing to “finance” a car; despite those natural temptations that we are exposed to. We will only pay cash for a car. If we don’t have enough cash to afford the car we want, we simply can’t afford it. So we walk away.

So I spent my Thursday lunch break to check out the car. It was everything I needed. However, I did some research that night and discovered Suzuki stopped production in America back in 2012, and they have no parent company.

In other words, it’s a great deal on a dependable car that ultimately I would have great difficulty trying to maintain, as there are no shops that readily have proper tools or parts available to fix it.

After that, Mommy and I realized it’s best we hold out until January, when we have that many more thousands of dollars (from ongoing monthly savings) to pay in cash. 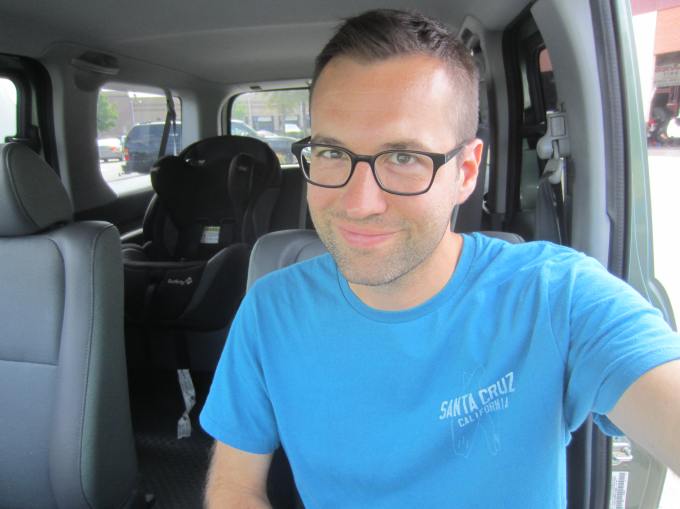 Here’s the twist on this story: Over the weekend when we picked up my Element after they fixed the window, the guy that evaluates the worth of used Hondas there for trade-ins left me a message.

That’s because, according to the elevator, “People aren’t trading in Elements- they’re keeping them. That’s why your Element is worth more than whatever it says online. You’re the first person to ever come back and tell me you’re actually interested in trading yours in.”

So in the end, it was totally worth it in the end to pay a few hundred dollars to fix my window. 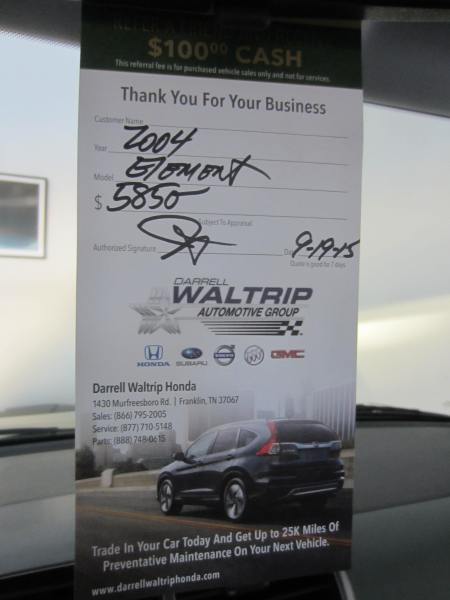 It’s like instantly making $3,000! We’re still planning on holding out until January, when we can have that much more money to buy a “barely used” vehicle for our family, when we trade in my Element.

Something else this experience taught Mommy and me is just how boring and unattractive we are to used car salesmen the moment we begin the conversation with, “I’m a Dave Ramsey follower; I will only pay with cash.”

You can literally see the hope in their eyes disappear once you say that. Because most people are willing to “finance” the car. That means there’s virtually no real limit on price, since the focus becomes on the monthly payment, not what person can actually afford.

That’s something I equate with a magician distracting his audience by waving a pink handkerchief with one hand while he hides the “disappearing” object in the other.

I will make sure you always understand the true meaning of the phrase “affording a car.”

It’s this simple: If you can’t buy it on the spot in cash, you can’t truly afford it. That’s why dealerships are so eager to have you finance the “purchase.”

Similarly, an individual or a family is only as financially wealthy as their savings account in addition to having no debt other than their house; that’s because a home is considered an asset growing in value, not a depreciating liability like a vehicle.

So our family will wait. By January 2016, our savings should be that much higher if everything remains on course; meaning we can pay cash for the vehicle that we really want. And as I mentioned, coincidentally, this coming January will be exactly one decade since I purchased my 2004 Honda Element.

Ultimately, I’m not sure if I’m technically going to be downsizing or upsizing…

My Honda Element is a decent sized SUV, but it only has 4 seats. That’s never been a problem, but I think it would be a good idea to have 5 seats for the next car, even if the next vehicle is smaller over all.

Until then, I’ll keep driving my green toaster and saving green cash.

Fighting the urge to the live by the new American motto: If it ain’t broke, get another one anyway.

I can almost remember a time when I was a kid, where it was normal to really really want something for a long time and then when I would finally get it, my heart was content.  The newly obtained item gave my heart rest, and I was happy, as any kid should be.  Whether it was a new Nintendo game like Super Mario Bros. 2, or a bicycle, or a rare Ninja Turtle action figure like Splinter, April O’Neil, or Ray Fillet, I got what I had wanted for so long.  And funny enough, I never wanted a replacement after I received my prized possession.

But somewhere along the way, whether or not we can blame it on “typical capitalist American behavior” or the mindset of Generation X (I just barely made the cut- it’s anyone born between 1961 and 1981), it became normal to want a “new one” though the old one still works just fine.  Maybe just an innocent desire to keep things fresh.  Or maybe a potentially dangerous pattern.

My Italian grandfather was one of the most influential people of my lifetime.  Having grown up in an orphanage in Kenosha, Wisconsin (his mother died when he was young, and there were 12 kids in the family), he lived a minimalist lifestyle, only spending his money on his few children and grandchildren.  Hardly ever buying a new (used) car, new clothes, or new furniture.  Never buying anything name brand.

This way of thinking definitely shows up in my everyday life.  My wife jokes that I have more clothes and shoes than she does.  And it’s true.  Because I don’t get rid of them unless they’re literally rotted.  Like my old red running shoes I have delegated to only use for walking and riding my mountain bike on my lunch break.

It’s true that I own over twenty pairs of shoes that still look less than a year old.  But most of them are indeed at least ten years old, in actuality.  Because I have certain shoes I wear only if I know I will be outside or if there’s a chance of  rain that day.  Those are my “outside shoes”.  By wearing them instead of my “inside shoes”, it keeps my newer shoes looking new.

While I’ll never be as frugal as my grandfather (who when my mom was a little girl, reused dried out paper towels multiple times before throwing them away) I subconsciously try to imitate his lifestyle.

I can’t see myself ever buying a brand new car, knowing that it loses thousands of dollars in value as soon as the first owner drives it off the lot.  And I can’t see buying a different car until my current one costs more to repair than it does to actually buy another used one.

Not that buying a new car is any kind of moral issue, or that going on a shopping spree for a new wardrobe is necessarily evil, though it’s probably not a wise decision if it involves a credit card (I’m a Dave Ramsey fanatic).  But for some of us, that strand of “gotta get a new one” serves as toxic acid in our DNA.

It gets tiring hearing of men leaving their wives for another woman.  That’s definitely a familiar theme this year already in the media.  And while some could say, “What does to me if matter if Tiger Woods or Jesse James cheats on his wife?  Why is that national news?”  Because it does matter.

Not because we’re nosey.  But because in some sense, the reflection of the lifestyles of celebrities causes a subconscious call-to-response for the rest of us:  “Hey look, it’s normal, he did it.”

It shouldn’t be that hard to be happy with what we’ve already got, even if it’s not perfect.  And really, that’s a mindset that is often difficult to accept and adopt: Near-perfect is as perfect as life can really get.