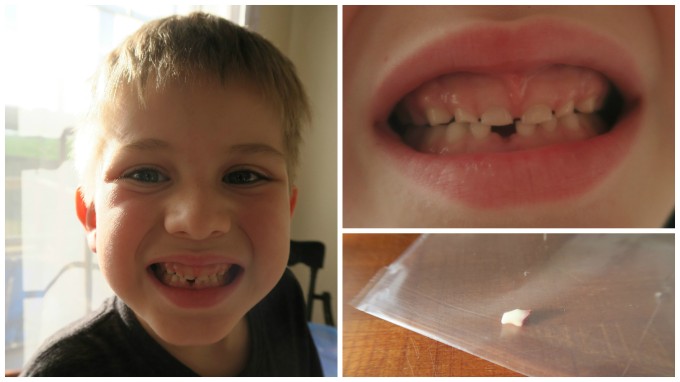 Last Thursday as I drove you to school, you told me, “Daddy, my tooth is starting to hurt a little bit now when I wiggle it.” I told you that was a good sign you’d be losing your first tooth pretty soon.

When I got home that evening from work, Mommy immediately called you over to me.

You then announced: “Daddy, look! I lost my tooth!” You held up a clear plastic bag, containing your little white trophy inside.

This is amazing to me, as it was such a quick process; not long and drawn out over several weeks like it was for my first tooth. There was no need for me to tease you about scenarios in which I might have to tie a string to your tooth on one end and then to a door knob on the other, then slam the door, causing your tooth to be jerked out.

None of that was necessary. It was just so simple and subtle with your first tooth.

Not to mention, you’re not even 6 and a half yet; still in Kindergarten. From what we can remember, Mommy and I were in 2nd grade.

As I got you ready for bed that night, you explained you would rather place the tooth on your night stand, not under your pillow. I had no issue with that.

What you didn’t explain, however, was that for some reason, you decided to place the tooth on top of the plastic bag, instead of inside of it. Don’t ask me how I know this, but the tooth fairy just picked up the bag from your night stand, leaving behind the tooth; along with 5 one dollar bills.

Once the tooth fairy realized that the tooth had been left behind, the tooth fairy had to crawl on hands and knees in the dark in an attempt to locate the tooth, assuming it had fallen into the carpet. Fortunately, the tooth was still on the night stand somehow.

Your first tooth was lost in more ways than one!

2 thoughts on “Dear Jack: You Lost Your 1st Tooth… and So Did the Tooth Fairy!”