Sunday morning, with Nonna and Papa in town, Mommy had made breakfast for us all. I immediately noticed that you and I had matching “bedhead” hair. The conversation topic was the fact we heard coyotes howling during the night.

Somehow, that discussion inspired me to run in my closet and pull out my “rat pack” puppet. I had bought it right before you were born, as I had planned to use it as a character on one of my children’s programs on my YouTube Channel. But I haven’t had the time to dedicate to making new episodes since you were born.

I got the hunch you would find an appreciation for who I call Magellan the Mouse.

And I was right. 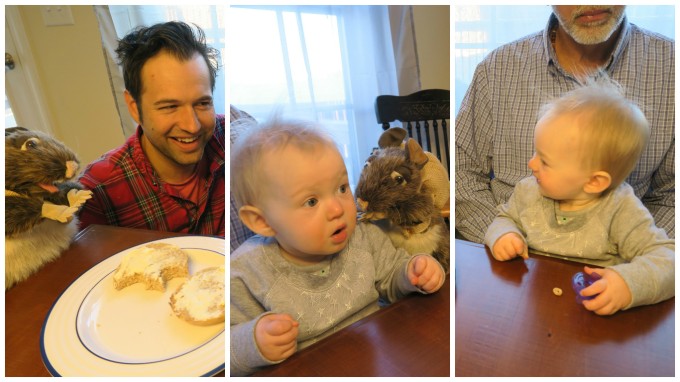 At first, of course, you were skeptical of the giant rat who was apparently trying to share your Cheerios with you. You weren’t afraid of him, you just didn’t know if you were in the mood to share your food with a non-human.

You eventually warmed up to him, though. Then you weren’t so much annoyed with him, as you were just confused on his origin story.

How had you never met this friendly rodent before? After having lived on this planet for nearly a whole year now, and in our house, how does a giant rat just show up?

Why did everyone else just instantly welcome him, like we’d always known him?

But that’s how it is for you. Being the baby of the family, you’ve just learned to roll it, whatever it is… including a giant rat who wants to help you eat your cereal.

A few hours later after lunch, you were winding down, getting ready for your nap. I have no idea how my Ewok action figure from 1983 showed up with your toys, but you chose to clench it in your little hand as Mommy wrapped you up in a blanket to feed you your bottle and then to rock you to sleep.

But before you actually fell asleep, Magellan the Mouse made one more appearance. I have a feeling he’ll be sticking around.