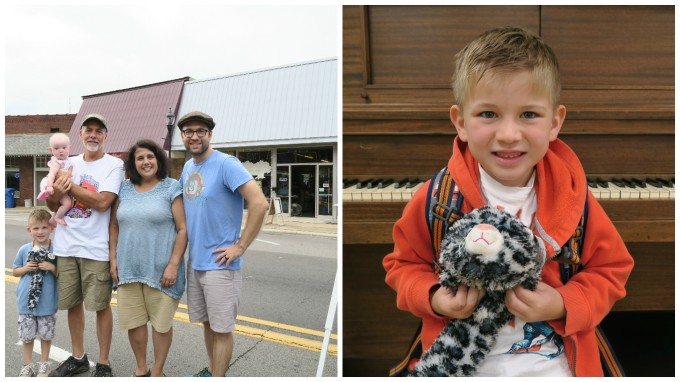 As we walked down the closed main street of my hometown of Fort Payne for their annual Boom Days festival, you saw that I was catching up with some classmates I haven’t seen in 17 years. You knew it would be a while; as you stood there holding Papa’s hand and while Nonna held your baby sister.

So you discreetly tugged on Papa’s arm, asking him to go with you to Addie Kate’s, a store across the street.

I saw this happen peripherally, thinking to myself, “Why would Jack want to go into that store? It doesn’t look like there’s anything for kids in there.”

About 20 minutes later, you and Papa emerged from the store. Turns out, Addie Kate’s does have something kids would want.

You proudly lifted up a new “stuffy”… a Fursians snow leopard named Slushy, with a huge tail but tiny legs.

“Look at what Papa got me!” you excitedly announced, as Papa stood next to you attempting to hide a smirk.

Papa explained, “Yeah, and he didn’t have to even ask me for it. He just looked around at the stuffed animals, picked up the one he liked the most, and looked up at me with those eyes. Then I walked up to the counter and paid for it.”

I couldn’t stop laughing, yet I wasn’t surprised.

It is hilarious to imagine that whole process.

You then admitted, “Daddy, I saw some stuffed animals in the window, from the street where I was standing.”

Yes, you are a clever boy. I’m guessing from the moment we left Nonna and Papa’s house for downtown, that you had already reminded yourself to look for an opportunity to find a toy for your grandparents to buy you. I have to give you credit for your dedication to a plan clearly worked.