4 Comments Posted on May 5, 2011May 5, 2011 People, Recaps, Spirituality, Storytelling, Uncategorized 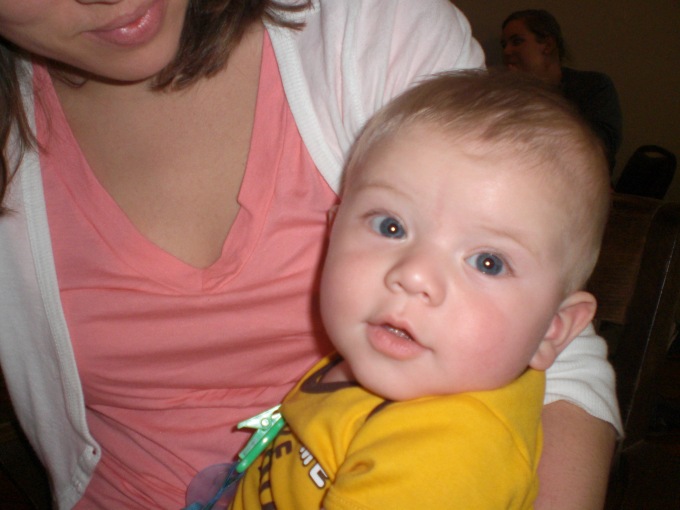 Jack travels well.  And that makes life a lot easier for my wife and I.  He really didn’t mind camping out two nights without power, then traveling an hour to stay in Georgia for two nights to stay in a hotel suite with us along with his grandparents, aunt, and uncle.  For a couple of days, we lived amongst people who were instantly made homeless by last week’s tornados, like Pastor Sidney Ford, featured here in this story by ABC.  He was such a blessing to us and it was an honor to meet him. 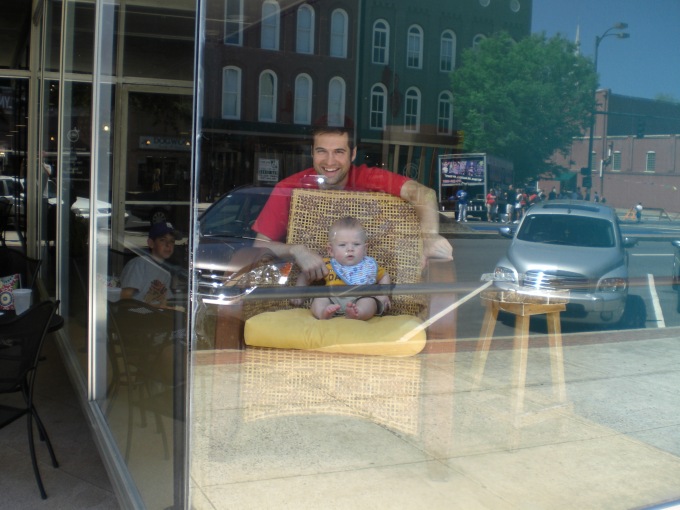 For us, life is picking back up to its state of normalcy.  Our power came back on Sunday afternoon, and everyone in my family was able to return to work on Monday.  My employer (who is also my dad’s employer as well) is so gracious to us that they are paying our wages for last Thursday and Friday, when no one could come to work because the entire city was without power.  I am constantly aware of how blessed (by grace) and spared (by mercy) I am.

I’m not convinced I’m the kind of person who has to be reminded by a tragic event just how fortunate I am- who gets so caught up in the “hustle and bustle” of life that they “can’t see the forest for the trees.”  Because I make it one of my daily personal goals not to become distracted by life- by the chaos and unsettledness and not-knowingness that each day brings.  I’m not saying that’s easy.  Something life has taught me is that typically when I am the least happiest, it’s often because I am focusing too negatively inward and not enough positively outward.  My own mind and attitude are fortunately and unfortunately much stronger and influential than I often realize and give them credit for.

But Jack doesn’t have to worry about that kind of stuff yet.  As long as he’s fed, played with, has his diapers changed, and has assistance falling asleep, he’s just happy to be here.  He thinks everyday is a celebration just to be alive.  And I believe that is one of the many reasons that a baby brings so much joy to us adults.  Babies teach us so much without speaking any intelligible words.

Our power went out Wednesday at 5:30 PM, an hour before the Wheel of Fortune episode I had been promoting would have aired.  Thursday afternoon after I posted from a Starbucks in Rome, Georgia, we drove home and collected all of the salvageable food from our fridge and freezer.  My parents, along with my sister and her husband, did the same thing.  My dad used his gas grill to cook Thursday’s dinner and Friday’s breakfast.  I never thought of cooking spaghetti, peach pie, and scrambled eggs on a grill, but it all turned out very well.

We didn’t go hungry, but I will admit, Baby Jack didn’t sleep very well through Thursday night- nor did his mom or me.  He woke up pretty much once an hour, and each time he did, the only light we had to rely on were our cell phones, which were already going dead.  Not really knowing when the power would come back on, my mom had me book a suite in Rome, GA for the 7 of us to stay in Friday and Saturday night.  And that brings me to now:

It’s 6:05 Saturday morning and I’m writing this in the dark- not because there is no power here in this Country Inn & Suites, but because Jack, Jill, and I are sleeping in the main room on the fold-out couch and I don’t want to wake Jack. Here at the hotel, he’s had his first decent night of sleep since the tragic tornadoes causing the power going out.

As I logged on to Facebook a few minutes ago, I saw that my friends on Lookout Mountain where I live (half of Fort Payne is on the mountain; half is not) now have power again.  Granted, that doesn’t mean any of my family will be able to return to work, since most businesses are located down in the valley.  But at least we can return tomorrow to our empowered houses again.  Though now there is no food in our refrigerators and I can imagine how it will be the first several days as the grocery stores began getting in new shipments of food. 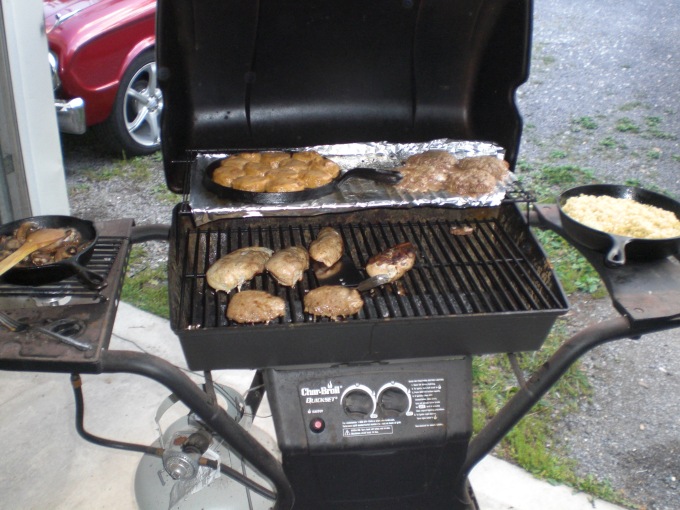 But thank God the power is returning quicker than we expected and again, that we are even alive and still have houses to go home to.  Last night in the hotel lobby I talked to a man and his wife who are staying here because they lost their home in the tornado.  For those who follow my “dad from day one” series, imagine what must be going through my head concerning our move to Alabama back in December.  We have now survived four of unemployment with a newborn, then not even a month into my new job, we are spared from the deadliest tornado since 1974, and possibly since 1932.  According to Wikipedia, over 350 people were killed by the tornadoes; 250 of those being in Alabama alone.

You can imagine some questioning on my end, as far as our decision to move from Nashville to Alabama. 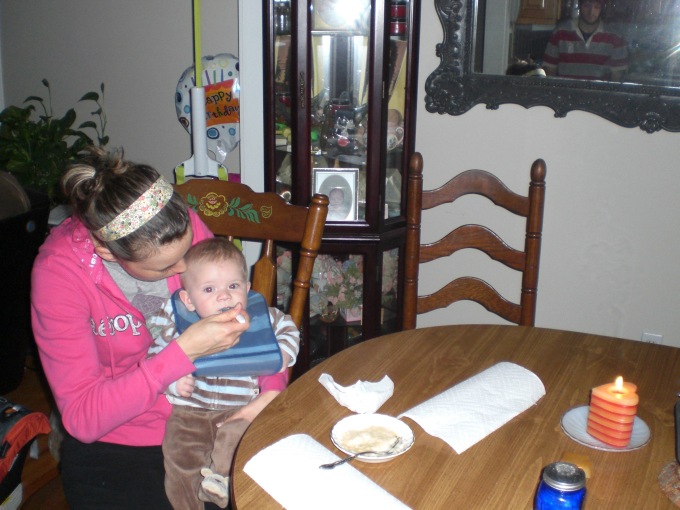 This picture was taken in complete darkness, other than the candle on the table. (I used the flash on my camera.)

However, following what we perceive as God’s will doesn’t mean we are taking the easy road, leading us to an extravagant life of riches.  In our case, our current test of faith has everything to do with the willingness to resettle our lives in Alabama. No decision we can make in our lives can guarantee things will get either better or worse.  It’s a lot like Wheel of Fortune.

Which, speaking of, I just want to again invite anyone who missed Diana (who gave me the idea for the name of my upcoming spin-off) on Wheel of Fortune the night of the tornadoes, to watch the episode now.

CHICAGO MOM SPINS AND WINS ON
“WHEEL OF FORTUNE”

Diana Taub of Chicago, IL, will be a contestant on “Wheel of Fortune” on Wednesday, April 27, 2011. Diana is a huge fan of “Wheel” and grew up watching the show. A former elementary school teacher, she used to play a version of the game in the classroom with her students. Diana currently stays at home with her eight month old son, Jake. In her free time she enjoys baking, photography and crocheting. She hopes to use her winnings to turn her favorite hobby of photography into a business. Diana also wants to take her mother on a trip to Scotland. She tried out to be a contestant at a Wheelmobile event.

Additional Information: Diana won $7,050 in cash and prizes, including a trip to Dublin, Ireland.