I thought you were going to be a dinosaur this year for Halloween.

I say that because back earlier this year, you convinced Mommy to buy you a dinosaur costume for Halloween.

Ultimately, it became a play costume for you to scare your sister with when you play.

But when Halloween actually got close, you suddenly decided you wanted to be a ninja instead.

Mommy agreed to the idea, knowing that we had most of the clothing in your wardrobe already.

You had some apparent regrets, though. You asked Mommy the day before Halloween:

“Can we not do homemade costumes next year?”

It was supposed to start raining around dinner time on Halloween. I really hated that for you; that it would be nearly impossible to visit many houses on the one day each year we attempt to visit every neighbor in our neighborhood with their front porch light on.

Amazingly though, it was perfect weather outside; for any day of the year, actually.

It was about 66 degrees and the wind was barely blowing.

Not to mention, more neighbors were giving out candy this year, compared to the previous Halloweens we’ve lived in our neighborhood.

We literally visited every single house with the light on.

And when we got back to our own house, there was no room left in your bucket, even for another pack of Skittles.

Maybe your dinosaur costume scared them into giving you a little more candy this time? 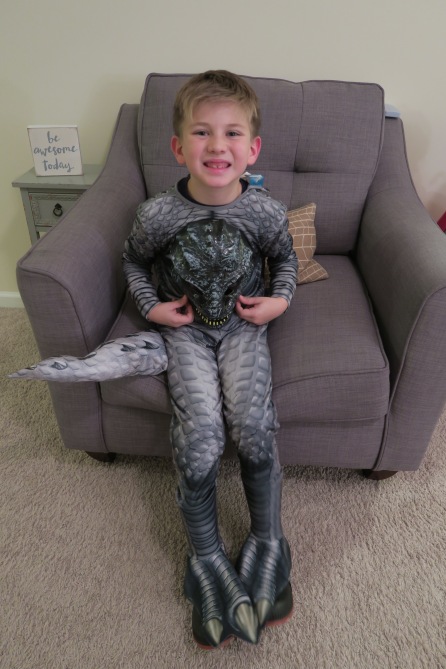 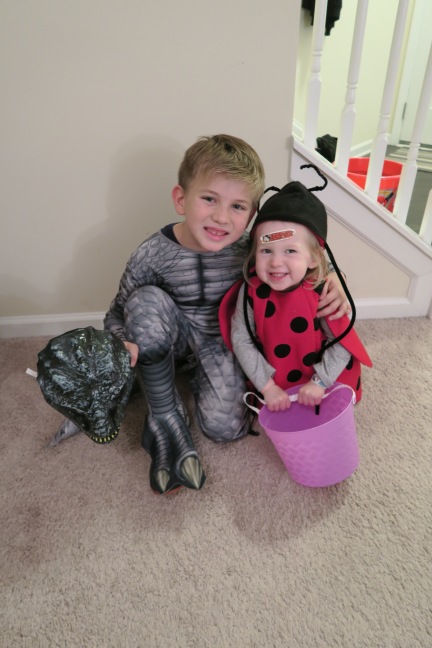 During the past week leading up to Halloween this year, your brother and I kept reminding you, “Okay, Holly, if you want to get candy, you have to wear your ladybug costume…”

Therefore, you practiced wearing it every couple of days, just to get a good feel for it.

We went on to teach you the secret special phrase, “Happy Halloween!”

You grasped the concept quite easily.

Your brother even made a special deal with you right before we went trick-or treating, that he would give you his chocolate candy if you would give him your sour candy.

At each new door in our neighborhood, you proudly smiled and said those magical words…

One neighbor even gave you an extra pack of M&M’s, simply because of your cuteness factor, after he already gave you two other packs.

And no, the Mickey Mouse Band-Aid on your favorite wasn’t because of a cut. That was just you being you.

After having ventured to Gentry’s Farm to get our family’s pumpkin to carve for Halloween, we just didn’t get around to actually carving it in time. So we took it to Nonna and Papa’s nearly a month after Halloween… for the wrong holiday. 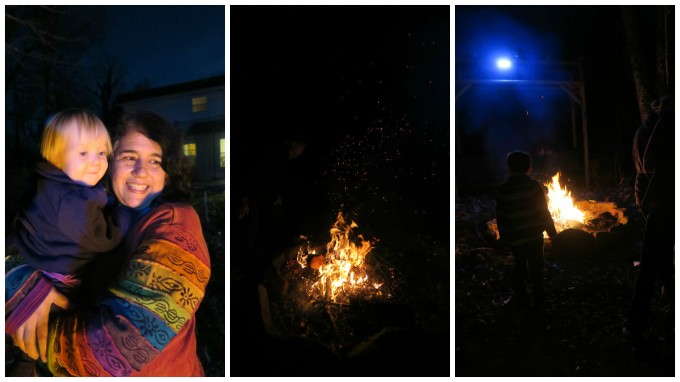 Papa then built a bonfire in the backyard to extend the feeling of pumpkin carving season.

Since your Uncle Joe and Aunt Rebecca were visiting from Pensacola, we also spent part of Thanksgiving break to introduce them to DeSoto Falls; not that far from where I grew up.

I’m fortunate to be from such a cool outdoorsy town (Fort Payne, Alabama), as it is not the average hometown to spend the holidays in. I was very proud to be able to entertain your aunt and uncle by showing them the giant waterfall up on the mountain.

It’s especially neat because we were able to get pretty close to the water, but kept from certain danger thanks to some guard rails.

While we were enjoying the views, we looked up and saw a few drones flying above us. I imagine it must be an awesome place to fly one around; as long as it doesn’t get caught in the rapids.

I have to assume in a just a few years, you’ll be asking for a drone for your birthday or Christmas, as compared to just Pokemon cards like you are currently obsessed with.

Turns out, your Uncle Joe and Aunt Rebecca enjoyed their Thanksgiving visit so much, they decided to drive back up from Florida again for Christmas- and this time they are bringing their teenage daughter who you enjoyed spending time with at Uncle Jake’s wedding in San Diego last year. 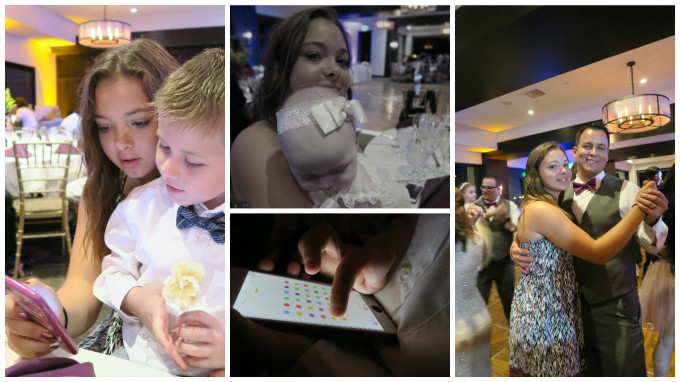 Whatever we all end up doing during our 5 days in Alabama for Christmas, I know we’re all going to have a great time! 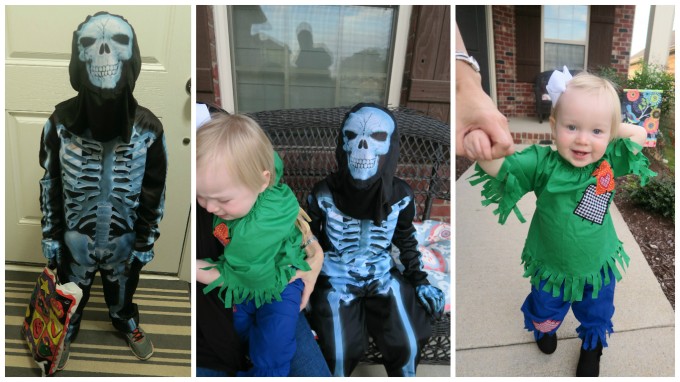 Last Friday night we took our first family drive as in the 2017 Lexus IS 350 and made our way to your brother’s school for Trunk or Treat. Having just turned a year and a half this week, you have been busy using your brain to attempt to understand how the world works.

I would speculate that the American tradition of Halloween has to be a bit perplexing for you. For example, why was your brother dressed up as a skeleton? He looked so scary!

And why did Mommy insist on you wearing a scarecrow outfit? So strange… 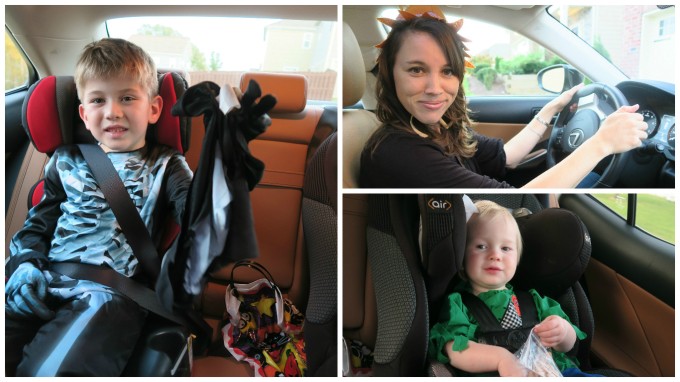 Since you refused to continue wearing the hat to your scarecrow costume to the car, Mommy decided to wear it instead. At that point, realizing I was the only person in our family to not be wearing some kind of special costume, I decided to go as a guy who requires me to just look like I already do…

My non-costume costume was that I pretended to be the guy from the Campbell’s Go Southwest Chicken soup package, since everyone apparently already thinks that’s really me. (It’s not!)

Once we arrived at the school, your brother began collecting candy from all the parents and school teachers who had dressed up the trunks of their cars.

You tried your best to process what was real. For example, you saw a child walking past you dressed in a giant dinosaur costume. Immediately, you pointed, and make a guttural sound that apparently was your attempt to make a scary growling sound like you thought dinosaurs should sound like.

I think next year you’ll be able to appreciate Trunk or Treat a little bit more. The next morning, we made our way to the pumpkin patch. That was much more your speed. 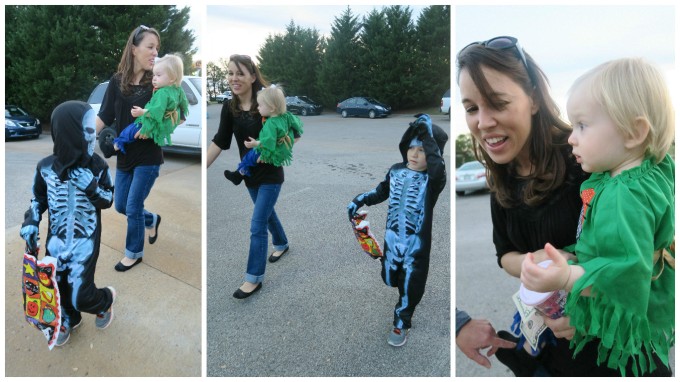 My preconceived expectations were accurate:

Your teacher was quick to point out you have a “sweet demeanor.” This didn’t surprise me at all, as you were the first boy Student of the Month of her class this year.

She went on to show me the tests and data proving to me that you are on a 4th grade reading level, which is uncommon among your fellow Kindergarten classmates: That figures when your dad has an English degree and is a blogger, right?

She also explained that she had to move you in the classroom to a different desk because you were getting too distracted by talking to your friend Duncan.

And she laughed as she explained you have a somewhat involuntary habit of “cheerfully making sounds like a crying baby” while you are conversing with your classmates during activity time. 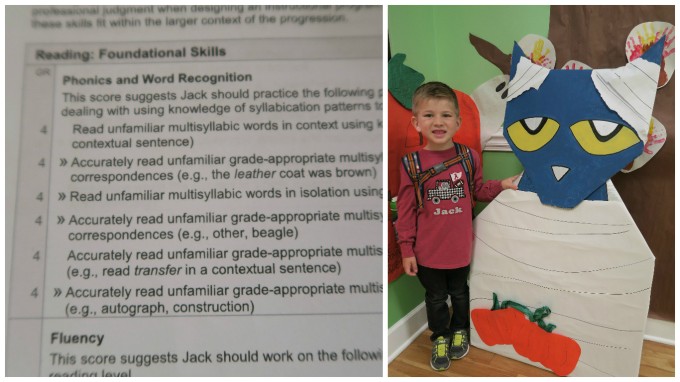 Here’s why I’m so proud. And no, it’s not actually the part about you being on a 4th grade reading level.

It’s simply the fact you are a well-balanced boy.

Yes, you’re intelligent; and I’m quite grateful for that. But more importantly, you still get yourself into just enough trouble to even things out.

Maybe I’m being too honest, but I actually I you to get into some trouble. As your teacher put it, “Yes, Jack is certainly all boy.”

For me as your Daddy, it was one of the biggest compliments I could have received- that my son is not only smart, but he’s also not perfectly behaved.

While you do have a “sweet demeanor,” you also get a bit rowdy with the other boys in the class; especially Duncan, who you tell us so much about each day when you get home from school.

And keep sneaking in references to passing gas in your classwork, as you recently named your Pirate Pumpkin, “Poody Pop.” 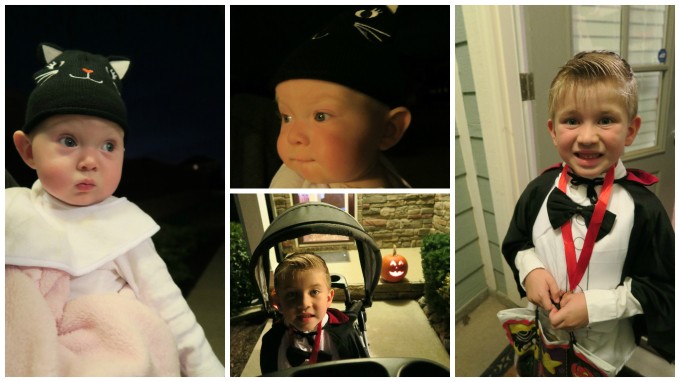 I realize that at 6 months old, Halloween is a new concept to you. I’m sure you were confused by what was going on, so I figured it’s a good idea for me to tell you about the fun our family had.

On Sunday, the day before Halloween, our family ventured over to Thompson Station Church for a fall celebration.

Even though Mommy and I already had your brother’s Count Dracula costume ready for him, which is what he’s been wanting to be this whole time, he decided about 15 minutes before left the house that he instead wanted to be “Baby Diaper Man,” which apparently was loosely based off of a villain he saw on Scooby Doo. 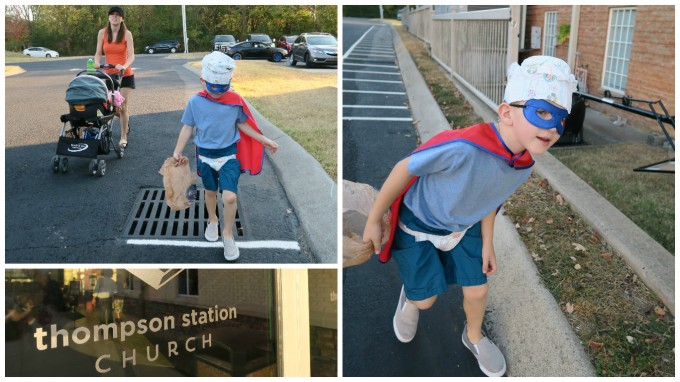 Jack insisted in wearing a diaper over his shorts, as well as one over his head, like a Captain America-style helmet. I suggested he also wear his cape and eye mask from his Jack-Man costume, to bring the concept to full fruition. 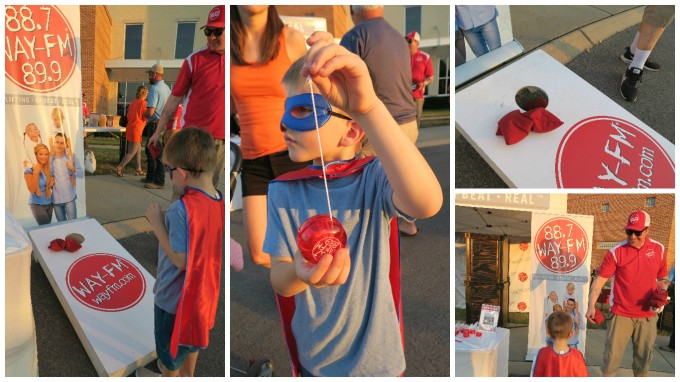 He was so proud of his original costume. Once we arrived, he ran ahead of you and Mommy, eager to enjoy the festivities. But the moment he saw another girl about his age, it’s like it hit him:

Wait, I don’t want kids my age to see my wearing my sister’s diapers! 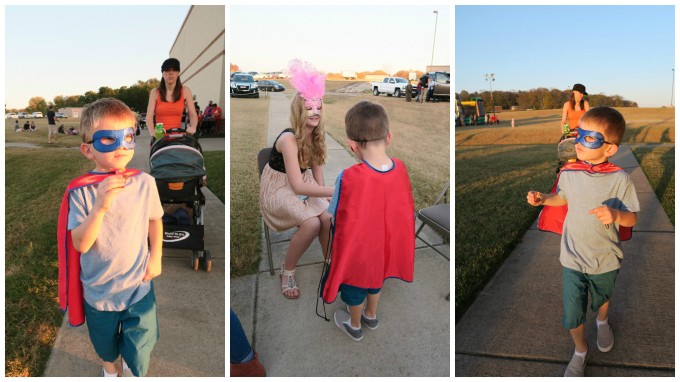 Immediately, he insisted on taking your diapers off. Then Jack became Jack-Man; his character in the 22 episodes of his series.

He really enjoyed getting candy from everyone, as well as going in the “jumpy houses.” Meanwhile, you completely slept through the whole thing; that was nearly a 3 hour nap! 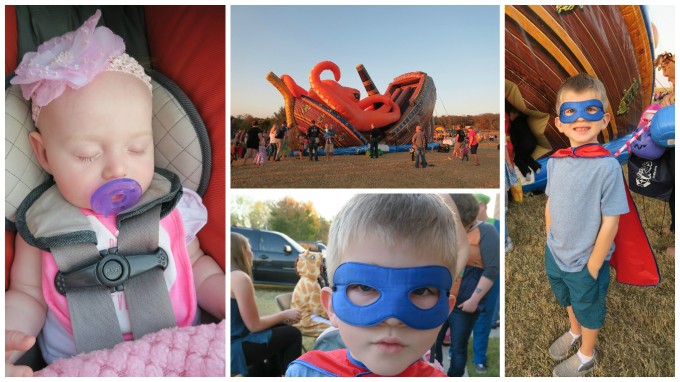 Then the next day on Halloween, our family got the double stroller into gear and canvased the neighborhood so your brother could collect candy: to eat, to experiment on, and to sell to the dentist for money (the candy is donated to the American military troops).

Mommy decided to carry you, instead of letting you ride shotgun in the double stroller, since it was already so dark at 6:45 PM, after dinner. It also was the warmest Halloween I’ve ever experienced! It felt like we were back in San Diego. 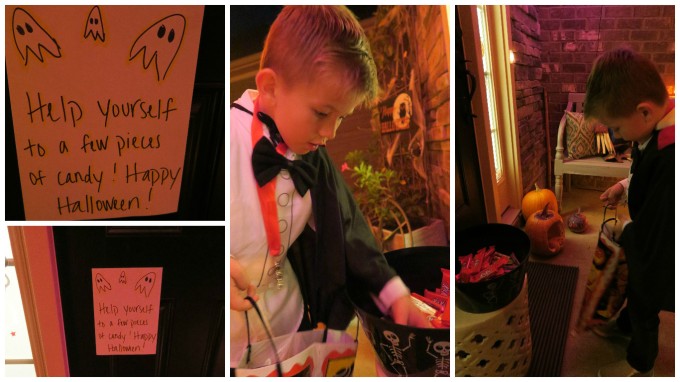 Your kitty hat (which served as your costume) couldn’t have helped the situation; as it was intended to keep you warm outside in the assumed October chill.

After visiting just a few houses, your brother Jack decided that instead of walking to each house, he wanted remain on the stroller right up unto the point where he was only a few steps away from each neighbors’ front door.

What a lazy Dracula!

I’ve never heard of a Count Dracula who gets has his own drive-up service. Seriously, your brother is a funny boy…

Next year, you’ll be a little bit more aware of what’s going on, so you can truly appreciate your Daddy pushing you around in a double stroller with your brother.