And so do you.

I am a mild-mannered, well-behaved, law observing kind of guy.  Yet still, if I was part of your daily life, I would at some point be the person to introduce conflict.  Your arch nemesis, your foil.  Because no matter who you are, you can’t always agree with everyone about everything.  If you could, you would have no opinion or personality.  You would be a life-size cardboard cut-out (like the supposed ghost boy in the movie Three Men and a Baby).

If every new day were an episode in the long-running series known as your life, the villain could easily someone different each time.  Some days it would be a coworker insulting your intelligence, some days it would be the policeman that caught you speeding, sometimes it would be your own spouse who you love more than anything but who somehow found a way to hurt you by something off-hand remark they made, unaware.  At some point though, we all play the villain for someone else.  But what if the same “jerk cop” who gave you a ticket two months ago happened to also catch a drunk driver the next day, preventing a possible tragedy in your own life?  The cop would be both a villain and a redeeming character.

Actual picture of me playing Prince Charming during the Snow White play during the summer of 1991.

During the summer of 1991, I played Prince Charming in a community play version of Snow White and the Seven Dwarfs.  I remember how after the first performance, when it was time for the girl who played the evil stepmother to walk up to the stage and take a bow, the audience cheered especially loud for her and she was given a bouquet of flowers by her dad.  As a ten-year old boy, evidently still trying to understand the concept of reality, I thought to myself, “Hey!  Why are they cheering for her?  She’s so mean!” I couldn’t separate her the actor from her the person- though in real life, she was very friendly.  But at the time, I couldn’t see past her good acting.

Now as an adult, I think it’s funny when people who hardly know each other but who are in an isolated conflict often immediately assume that the other person’s character is morally flawed.  They make “right or wrong” issues out of political issues, or often just simply a matter of opinion.  Sadly, the lines have become blurred between healthy debate and emotional arguing.  For me, when observing a debate, I often privately award the winner as the person who refrained from speaking sarcastically and in a demeaning manner, yet still remained focused on the actual topic enough to simply counter their opponent’s offenses.  Emotion shouldn’t be the main drive for a debate; principle itself should be.  I fully realized this lesson after while writing “The Blog Sniper”.  (Whenever you see something on here both underlined and in bold font, it’s a link.) 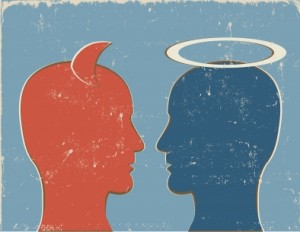 I couldn’t have been on the debate team in high school.  Because at that point in my (lack of) maturity, I would have refused to debate in favor of abortion if I was assigned to do so.   Back then, I wasn’t able to look beyond the emotional and moral side of it, and realize that in a professional debate, like Spy vs. Spy, the goal isn’t to prove the other person to be a classless idiot.  It’s to disprove their theory, opinion, or perspective through logic and consistency.  Today, even though I am an extreme pro-lifer, I would not have trouble debating in favor of abortion, because if nothing else, it would be an exercise in which I could gain a new perspective from looking at things from a different perspective to help my bank of knowledge on how I truly feel on the issue.  In the process, my efforts as the devil’s advocate would cause my opponent to strengthen their thinking tactics as well on the issue.

Being that this post is my 447th post  here on Scenic Route Snapshots, chances are, no matter what your political, religious, and cultural backgrounds are and how similar you are to me in those regards, if you were to read all of my posts, there’s a good chance you would at least disagree with a few.  And that’s okay.  Because despite me being perceivably misguided on a few topics, I’m still the same good guy that wrote the things you did agree with and appreciate.  I am a debater, not an arguer.