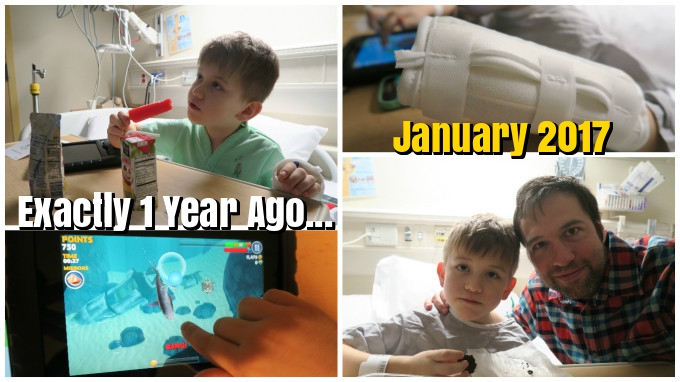 Leading up to this week, it was already on my mind; how exactly a year ago, you and I spent several days together in the children’s hospital after you got a parapharyngeal abscess as a side effect on Strep Throat.

And then this past Sunday, your sister got the flu, with a temperature of 106; therefore needing an IV for fluids.

So I just hoped then when you inevitably go the flu from her, that you wouldn’t have it as bad.

Fortunately, it appears you got a bad cold instead, more than anything. Your temperature peaked at only 104 degrees.

Therefore, on Tuesday, after you finally got to go back to school for one day (after nearly an entire month off due to the Christmas holidays, Martin Luther King Day, and a week of being snowed in), you were back at home with me and your sister.

It was surely a day of rest. We watched all 2 hours and 25 minutes of Chitty Chitty Bang Bang, which you suddenly declared is your “favorite movie ever”; as well as 2 entire DVDs of Pink Panther cartoons. Your sister gladly went along with it, as it was a special treat for her to have access to that much screen time; though really, she was playing with her toys most of the time.

I would like to think that February will be a less chaotic month for our family. Hopefully we can just all be healthy and enjoy my TV premiere on “This Time Next Year” on the Lifetime Network.

No more snow. No more sickness. Just back to school and back to the routine of homework and your Pokemon obsession.

You are an intelligent boy with plenty of energy. You were weren’t meant to be cooped up in the house all day.

Along with “Check, please!”, “I think it’s time for Plan B”, “That’ll leave a mark!” and “Smooth move, Ex-Lax”, one of my favorite overused quotes from ‘80’s sitcoms is the sigh-infused “I need a vacation…” When my wife and I were planning our honeymoon last year, many people assumed we were flying out to somewhere in the Caribbean Islands. Because that’s the normal American thing to do, understandably. Though we have never been to a sunny beach coast together before, we both were aware that sitting on the sandy shores all day doing nothing would drive us both stir crazy.

And while it’s possible to do both, ultimately a person’s instincts causes them to plan their vacation according to one over the other. The observation is this: People who like to sit and relax while on vacation (often known as “beach bums”) generally go to warmer, sunny locations and stay in hotels. People who like to explore go to less sought after places often with colder temperatures and higher elevations and stay in lodges, cabins, and bed-and-breakfast’s.

In the last two years, my wife and I have traveled to the foggy, cold, rocky coasts of New Zealand, Maine, and Northern California. We are drawn instinctively to places where there are not a lot of other people around and where there is exploring to be done. Always in search of the next perfect, quaint local coffee shop. Or that beautiful scenic drive we can only take in a rental car in a city we’ve never been in before.

And when we can’t go on a week long vacation to a place we can really only get to by plane, we enjoy hanging out in The Highlands of Louisville, KY (an artsy hippy neighborhood with lots of cool, weird ethnic restaurants including Moroccan, Turkish, and Argentine, to name a few), Sevierville, TN (equipped with black bears), and Fort Payne, AL (my hometown that somehow became cool again when I wasn’t looking).

Most people take their vacations in the summer, when it’s hot. As I do. And most people travel to places that are even hotter than where they live. As I don’t. I loathe the depressing England-like climate of American winters, except in the summer when I want to escape to it. I escape to a more isolated city with less people around with no need for AC.

If people go on a summer vacation to escape all the chaos around them, why do they go to a really busy beach where it’s honkin’ hot? Shouldn’t they do the opposite? Shouldn’t they cool off in a quiet, peaceful place? I am the self proclaimed opposite of a beach bum.