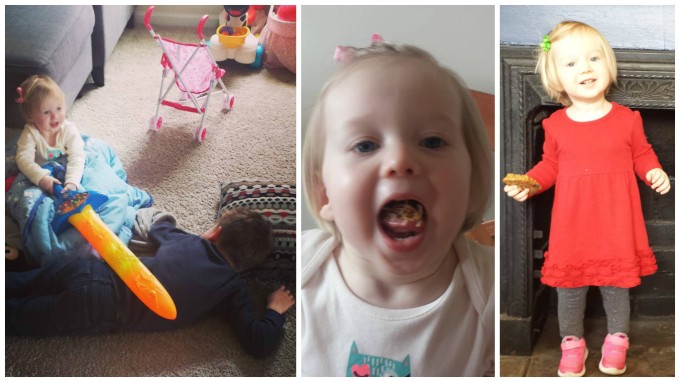 I am convincing myself that you will not go through The Terrible Two’s. Your brother didn’t. So I want to believe the same can be true for you.

With that being said, your personality is noticeably different than your brother’s was at this age.

For example, it nearly takes Mommy and me both to physically get you dressed in the mornings now, as you’ve made it abundantly clear you believe wearing clothes is a waste of time. You recently crafted a new trick where you ask to go potty, simply so you can get undressed and then run around the house:

And like I mentioned last week, during Spring Break at Nonna and Papa’s house, you found a way to climb out of the crib, twice; as a protest to taking your daily afternoon nap. And then when Nonna asked you how you got out of the crib by yourself, you just simply replied, “I climb.”

Your brother has never been shy, but you show a certain fearlessness at such a young age that he didn’t show. There was at least a reluctance he’s shown. As for you, not so much.

And I’m sure it has something to do with the fact that Mommy and I are raising you differently than your brother, by default; since we were first time parents with him.

Raising you, we as the parents are a bit more fearless, as we have an idea of how things generally work now in the world of parenting.

I suppose it doesn’t help that since becoming a stay-at-home dad 6 months ago, you’ve had extra exposure to my exclusive masculine parenting style; alongside having an older brother who I often have to remind to not play so rough with you.

So while I’m confident you’ll never be a tom girl, I am quickly getting the feeling you’re going to be a feisty little girl who knows what she wants; while still charming me with your adorable little smile.

But hey, I’m up for the challenge.