Apparently, I have the face an everyday Joe who happens to be smart enough to figure out how to win the Lotto 7 times.

This morning a friend from college sent me a screen shot of an article on ESPN, asking me this question:

“Hey – I took this screen shot at the bottom of an ESPN article. Is this you? And if it is, did you know your likeness is being used?”

The answer is yes, that’s my picture; and no, I did not know my photo was being used to promote a story about the Lotto.

It’s very easy to prove that’s a picture of me above the clickbait article, “A 7-Time Lotto Winner Reveals the Big Mistake You Make When Playing the Lotto”.

They simply cropped the title card from my 6th most popular YouTube video, “What a #1 Guard Buzz Cut Looks Like With a Receding Hairline”.

I published that video back on December 20th, 2015, and since then, it has received over 49K views.

So I laboriously scrolled ESPN.com until I found the article. When I clicked on it, the actual article does not feature my picture; and title of the article changes to simply, “How to Increase Your Chances of Winning the Lotto”.

However, I was unable to share the article from my phone: lottodaily.lifestyleguide.pro/lotto/

It comes up as an invalid website when you search that or any of the content from the article.

So it’s as if the click-bait article was deliberately coded in a way that it can not be Googled; the only way to get to it is to click on the ad from a 3rd party.

Some major irony in me being forced against my knowledge or permission to be the face of click-bait, is that I fundamentally do not believe in playing the lottery.

For me, it’s not a moral issue. Instead, it’s common sense one. I see the lottery as “a tax for people who are bad at math.” This concept is only reinforced in movies like Casino and The Godfather, Part II.

While I quickly admit I am definitely bad at math, which is why I’m naturally more skilled in writing and communication, I am a follower of Dave Ramsey. Therefore, it goes against my identity to play the Lotto.

I definitely do not endorse the lottery, nor did I win the lottery 7 times.

However, I do own the rights to the photo, and when you click on my YouTube video, you’ll see that I published it on December 20th, 2015; nearly 2 and a half years ago. It’s time stamped.

This reminds me of an article I read back in November 2017, where a photographer’s photo of VHS cassettes were stolen, to be used as part of Netflix’s Stranger Things boxed set.

It also reminds me of another article I read yesterday about how SnapChat’s value dropped $577 million in value when Rihanna’s picture was used without her permission in a tasteless ad.

Here’s a convenient side by side comparison proving that’s my picture; the ESPN ad on the left, and my YouTube channel on the right: 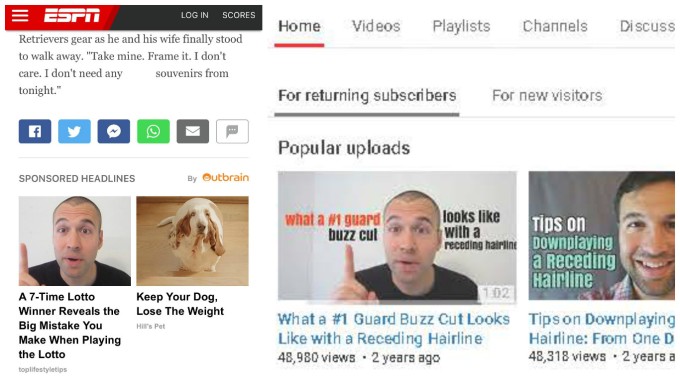 So what do I do now? Does ESPN have any responsibility in this? Now that I have tweeted this story to them, they are officially aware that one of their sponsors is using my image against my will; and even worse; not crediting me or paying me for my image, which is part of the reason people are clicking on the lotto story.

Or is it left to me to go on a wild goose chase, in an attempt to find the 3rd party of a 3 party who is recycling this lotto story, yet not making it possible to directly find their website.

After all, TopLifestyleTips, the website named below my photo in the ad, is not an existing website. Here’s what happens when you Google TopLifestyleTips along with A 7-Time Lotto Winner Reveals the Big Mistake You Make When Playing the Lotto.

Under normal circumstances, that would bring up the existing article right away. The company responsible for using my photo without my permission, or at least any compensation, is doing a great job of hiding within plain sight.

Until then, I feel trapped in a Black Mirror episode, where my image is perpetually used to promote an idea I am fundamentally against, and am not even paying paid to participate in.

One thought on “My Photograph is Being Used Without My Permission and Unpaid, In an Ad Featured on ESPN.com (Or, “My Face is Clickbait for the Lotto, Even Though I Don’t Believe in Playing the Lotto”)”