Why this movie guy proclaims it to be “Movie of the Year”. 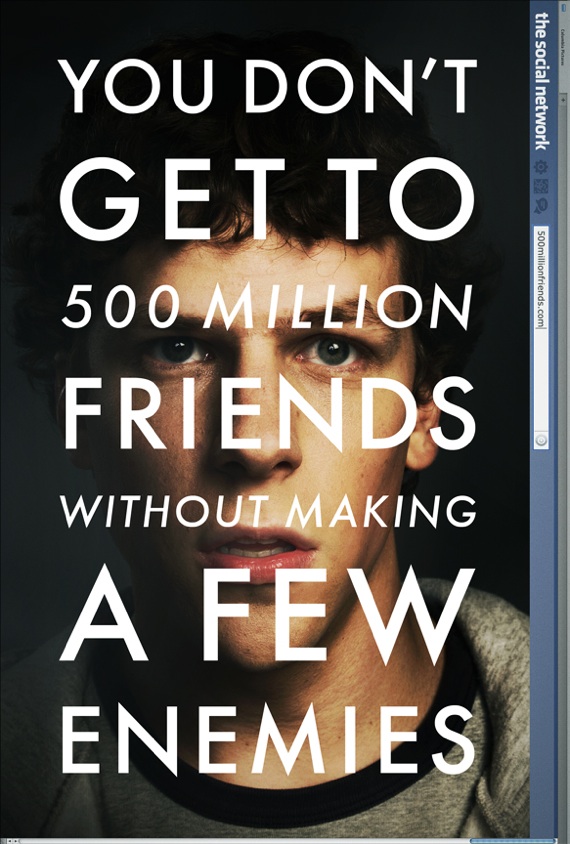 I am extremely picky when it comes to movies.  Extremely. Very seldom do I finish seeing a movie and say, “There’s nothing they could have done to make that any better.  It was perfect.”  But that’s what I said to my wife as I left the cinema on Saturday afternoon after seeing The Social Network.

For a person who hasn’t seen The Social Network yet, and especially for a person who hasn’t even seen a preview for it either, it would be easy to think of it as Facebook: The Movie, some light-hearted movie about how facebook got started.  Fortunately, the movie’s title doesn’t contain the word “facebook” in it.  “The Social Network” is the best possible title because the film retraces all of the random people it took to invent, expand, sustain, and make a confirmed success out of the website.

I always assumed that Harvard dropout Mark Zuckerberg himself was the responsible for it all.  Played by Jesse Eisenberg, facebook creator Zuckerberg comes across as an obsessed college student with Aspergers (he’s just extremely intelligent, instead), so consumed with his website idea that despite making facebook about socializing with people, that his last concern in the world is actually having real friends.

It’s interesting to see how Zuckerberg journeys through the entire movie, constantly finding ways to improve facebook, plowing through real-life friends along the way, collecting and adding their ideas to his growing snowball of a website.  I had no idea that Napster creator Sean Parker, cleverly portrayed by Justin Timberlake, at one time played an important part in it all.

A key factor in The Social Network‘s success is its dark and sophisticated tone. It’s not just Trent Reznor’s musical contributions going on in the background.  I can confidently state that the movie can’t be described as “fun” or “trendy”.  It’s not quirky in the ways that made Garden State a comedy as well as a drama.  The Social Network is simply just a drama, but an infectiously interesting one.  I was impressed how they could fit the coolness of an R-rated movie into the limitations of a PG-13 rating.

When the movie ended, I came to terms with the fact there was no real climax or truly resolvable plot… just like facebook.  In the movie, Zuckerberg compares facebook to fashion, in that it never ends.  The Social Network, from start to finish, is an ongoing, constantly evolving entity.  For me, the whole movie was a continual plot line and climax. This offbeat formula captures the idea of facebook so well.

For me to say that The Social Network is the movie of the year is to say that it’s better than Inception.  So just to be clear, for me, it was better than Inception. My guess is that most people who have seen both movies will disagree with me. But the cultural relevance, perfectly executed acting, and snappy pace of The Social Network kept my mind from ever wandering.  And in age where things like facebook only encourage ADHD behavior, a movie that can keep my attention for a solid two hours and one minute deserves a prize for that alone.

Ethnic Backgrounds of the Main Cast