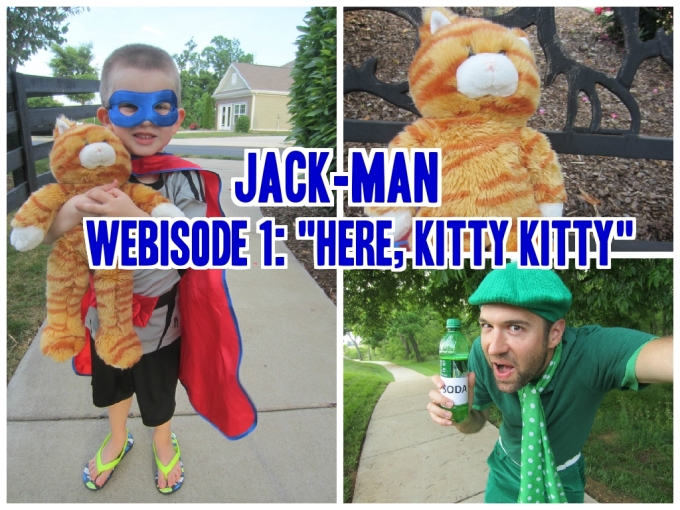 This past weekend, you and I shot our very 1st official episode of our new web series, Jack-Man. You were great! Here it is:

As the writer/producer/director/video editor/theme writer & performer, I can confirm that you (as the main lead) did very well following my instructions, scene to scene. I am very pleased with how “Here, Kitty Kitty” turned out.

I re-recorded the Jack-Man theme song, changing some of the lyrics, from the Toyota Sienna version I did for our homemade commercial.

Here are the new, official lyrics:

“Jack-Man, who will fight for justice?

Jack can, he really likes bananas

That man gets his superpowers from them

When it comes to creepy villains

He packs a punch and eats a healthy lunch

This is the 1st of many, many webisodes I hope to record with you. I plan to create a large collection of “creepy villains” (mainly played by me) for you to encounter.

In this 1st episode, the main underlying plotline of the show is revealed: Green Meanie attempts to get children hooked on soda, which in the words of Green Meanie, “is filled with sugar, caffeine, and weird chemicals.”

Soda is Jack-Man’s kryptonite, where has bananas and water are what gives him his super powers; those of which will slowly be unveiled as future episodes are released.

I’m not exactly sure who the demographic of the show is going to be. My assumption is that Jack-Man is designed for young children. Hopefully kids will like it; and hopefully, parents will deem it safe enough for their children to watch.

Obviously, being part of the super hero genre, there will be swashbuckling action… but if I do it right, our show should still be age appropriate for kids who would want to watch it.

We’ve already filmed the 2nd episode as well, which I plan to release in the next few days.