Last week I had the privilege, as a car reviewing daddy blogger, to be flown from my home in Nashville down to Ponte Vedra Inn & Club in Pompano Beach; about 20 miles from Jacksonville, Florida. I was invited to the Toyota “Family Reunion” where the updated Sienna, Camry, and Yaris were featured and available for several hours of drive time.

There were 48 of us journalists, writers, and bloggers attending the 2 day event along with me.

We were all given around 6 hours during the 2 days to drive all versions of the updated Sienna, Camry, and Yaris; as Toyota provided dozens of the vehicles for us to choose from.

I admit, I took full advantage of every minute of drive time in the beautiful palm tree filled landscape of Pompano Beach.

Toyota provided multiple drive routes for us to tackle with our driving partners, but I often found myself and driving partner so caught up in conversation about the car, and admiring the sunny location, they we would get off course, then just use the navigation system to help us get back to the Ponte Vedra Inn & Club where we were staying.

From there, we would pair up with new partners and cars.

I guess you could say I was “professionally joyriding.”

As for the 3 vehicles being featured at the Toyota “Family Reunion” Press Preview, I’ll start with the Sienna. 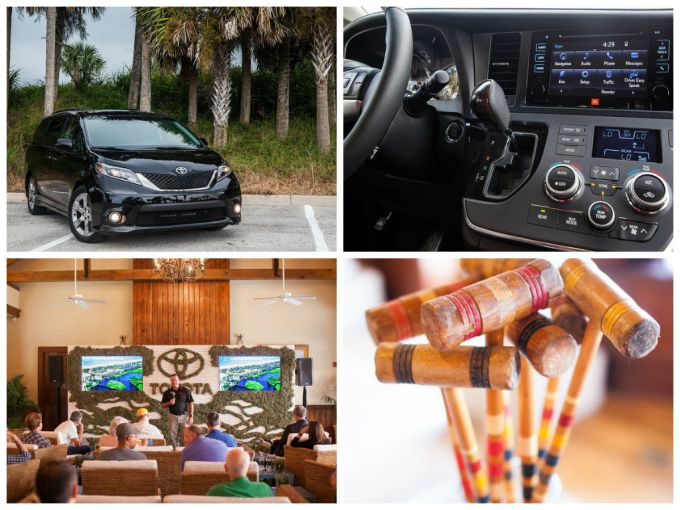 It was the first Toyota vehicle I ever reviewed, back in September 2013; in fact, it’s what got me started regularly reviewing cars for my daddy blog here.

With the updated 2014.5 model, I noticed a lower dashboard, easier to access controls, and of course their new Driver Easy Speak feature which enables the driver to use the cars speakers to communicate with whoever is in the back seat.

The acoustics are designed in such a way that if you are in the backseat, it’s almost like the driver’s voice is inside your head, like your conscience or something. That’s the best way I can describe it.

Moving on the Camry; I had never been in one my entire life until this trip! That’s ironic, considering that it has been the best selling car in America; 12 years in a row! Since it’s introduction in 1983, more than 10.2 million have been sold. And there are currently 6.6 million on the road today.

Something else I want to point out about the Camry is how American made it truly is. The production of the Camry employs 7,000 U.S. workers and the vehicle contains 75% North American content.

I view Toyota as more of an American car company than many official “American” based car companies. I realized that back in the summer when I reviewed the Highlander and saw the sticker on the door, showing that it was built in Texas.

My last vehicle to drive was the new redesigned Toyota Yaris; which has adopted more of a European look. As expected, I really enjoyed it; especially because I got to choose between a stick shift or an automatic.

You better believe I chose the stick shift. It’s a lost art these days to drive a stick and I am just the classic gentleman for the job.

In fact, I’m interested in driving more stick shifts when I review cars from now on, but I get it that there are less of them out there.

I hope to review the Yaris, as well as the Camry, in upcoming months. I really enjoyed driving them both in Pompano Beach, but unlike the Sienna, I haven’t already reviewed them back in Nashville with my family.

It will be interesting to me to see how those vehicles mesh with my family. I can see my son Jack really liking the 5 door Yaris.

My job here today has been introduce you to the newly updated Toyota Sienna, Camry, and Yaris. I hope you’ve enjoyed this glimpse, as I know I definitely enjoyed getting to be a part of this Toyota “family reunion.”

Stay tuned for more Lexus/Toyota/Scion reviews right here on Family Friendly Daddy Blog! I am reviewing a 2015 Scion FR-S the week of November 11-18 for my son’s 4th birthday.