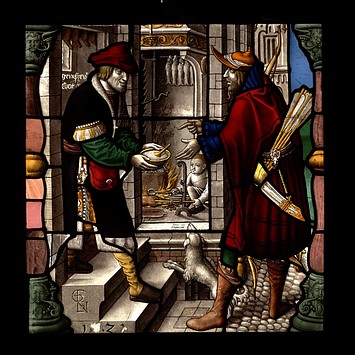 I refuse to refer to Jacob’s twin brother as “The Man in Black”- I will only refer to him as “Esau” until I am given an actual name from an upcoming episode, if that even happens.  To me, the struggle we see between Jacob and Esau on LOST is at least 50% familiar from the Biblical book of Genesis.  So that’s why I call “The Man in Black”, Esau.  Here are some comparisons:

In the Bible, Jacob and Esau were twins, like on LOST.

In the Bible, Jacob was smooth-skinned and Esau was hairy.  On LOST, Jacob dresses in white, Esau in black.  They are physically opposites in both instances.

In the Bible, Jacob was his mother’s favorite.  On LOST, the mother favored Esau.

The greatest thing I learned from watching “Across the Sea” is this: Jacob and Esau are not the original “eternal life” cursed inhabitants of the island.  The woman who raised them (the stepmom from the movie, Juno) had been cursed before them, evidently from drinking what I am currently calling The Fountain of Youth, making her (and eventually Jacob) the protector of the island.

Going back to the Season 5 finale, Ben killed Jacob.  And Ben had never drank from The Fountain of Youth and he definitely wasn’t The Smoke Monster.

And of course that’s why Juno’s stepmom (the lady who killed Jacob and Esau’s real mother, who was evidently Spanish, like Richard) thanked Esau when he accidently stabbed her to death.  Because he freed her from having to live forever on the island.  Though it meant she could no longer be the protector of the island, she had at that point already given the water to Jacob and he drank it.  Perfect escape for Juno’s stepmom.

So who was the first person to drink from The Fountain of Youth?  Mysteries…

After Esau lost his human body by becaming The Smoke Monster, he decided to take on the form of his now dead body by default.  That’s why he appeared to still be alive in the Season 5 finale as Richard’s slave ship was coming up in the distance.

I predict that Jacob and Esau had been playing their “I’m trying to kill you” game for a decade or two before Richard arrived, because they were both familiar that the fact that men come to the island to destroy and that it always ends the same. 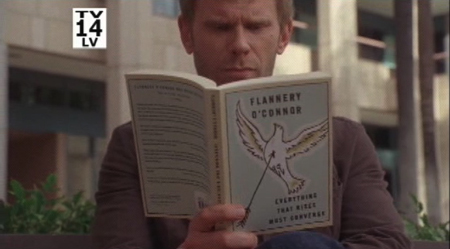 Jacob reading Everything That Rises Must Converge

I will close with notable quotes from “Across the Sea”:

“It’s inside of every man but they always want more.”  -Juno’s stepmom referring to the light that turned Esau into The Smoke Monster.

“If the light goes out here, it goes out everywhere.”  –same thing

“One day you can make your own game and make up your own rules.”  -Esau to Jacob

“I needed you to stay good.”  -Juno’s stepmom

“Promise me you’ll never go down there… It’s worse than dying.”  -Juno’s stepmom warning Jacob about the light that turns people into The Smoke Monster.