Last weekend you and I came up with a fun way to welcome in the warmer weather. I grabbed one of your bath toys from when you were a toddler and we headed out to the same creek we explored a couple of months ago during the blizzard.

The plan was simple: Drop the turtle into the creek and see how far we could follow it.

Because of the recent rain, there was plenty of current to carry your turtle along without much delay. It even made it all the way through a storm drain. I had thought for certain you and I would have to creep in there and rescue it; but no, not at all.

Good thing you were wearing your Spiderman rain boots, by the way.

I couldn’t help but sort of notice, the further we went along, that we were technically in between two backyards at all times.

The creek apparently serves as the divider between backyards on two parallel streets. Hopefully I was right in my thinking that us walking right alongside the creek, we weren’t actually in anyone’s backyard, no matter which side of the creek we were on.

No one came out and stopped us, at least. 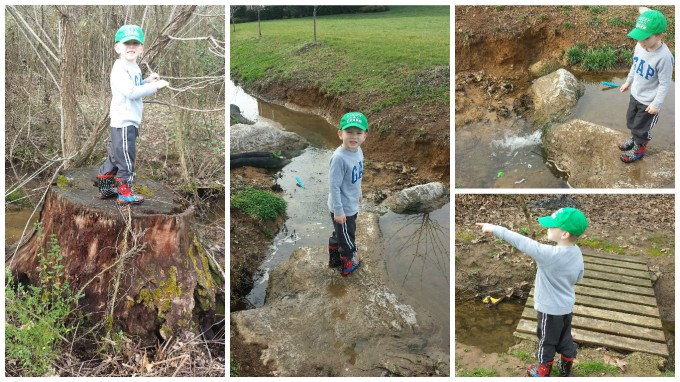 The coolest part was when the streets began veering away from each other into a “Y” formation, causing there to be a patch of woods in the middle. It was there that we discovered a really cool tree house!

That was about the place where the creek sort of faded into the woods. By that time, we needed to meet Mommy back at the house for dinner.

So the next day on Sunday, I drove you two or three neighborhoods away, in an attempt to pick up right where we left off from the day before. 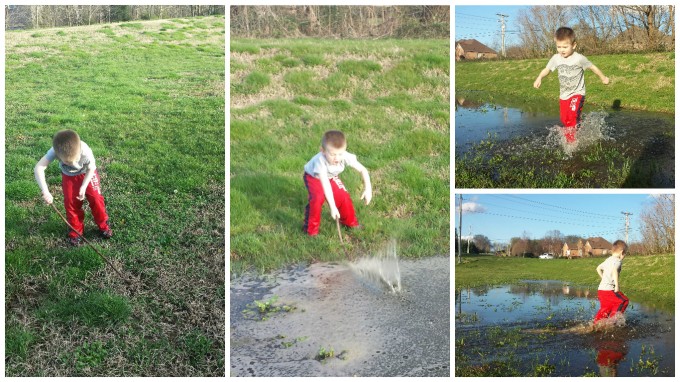 We indeed found the creek, but more importantly, we found an entire flooded field; which was again, technically in was people’s backyards, but not quite.

You enjoyed poking a stick into mole holes as well as jumping into the puddles. It’s amazing what interesting things you can find in your own backyard… or someone else’s!